The Hobbies and Model-Making Thread

The Hobbies and Model-Making Thread

I guess this is the closest thing we have to a 'hobby thread'. I recently finished my 1/72 Tomcat model, as they looked on USS Nimitz in 1986. "Your ego's writing cheques your body can't cash!" 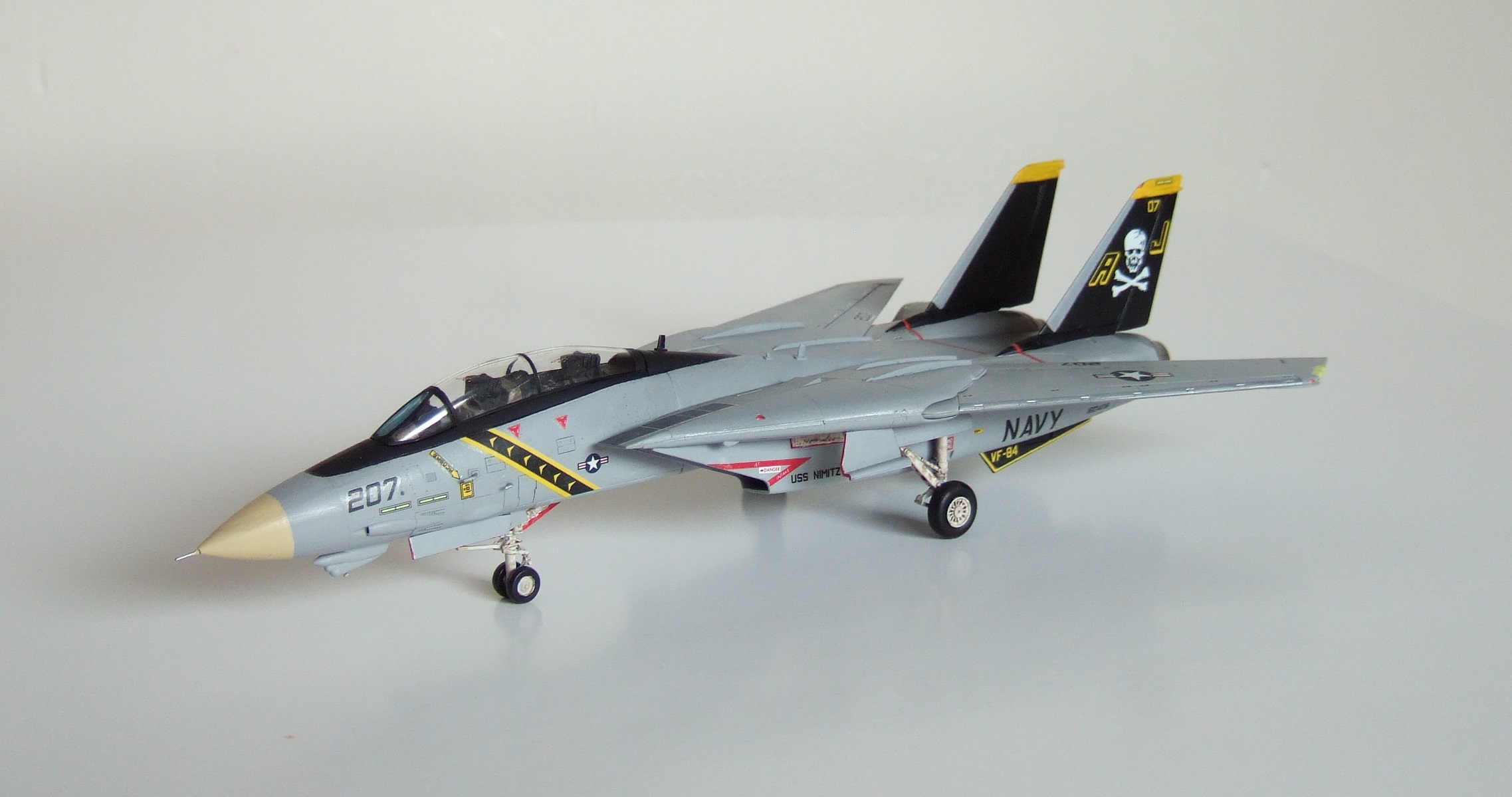 Very nice!
Between tedium and fright
Such is the song of the nether world
The hissing of rats
And the jarring chants of angels
Top

Thanks. I had a bit of a nightmare with the varnish though. I don't have an airbrush so had to do it by hand. The main coat was from a spray can.

I've decided if I do another one I'm definitely buying an airbrush!
Top

I once spent about £50 on model paint rattle cans to paint one (quite complicated) model. That was for very basic dull acrylic paint with no top coat. With an airbrush I worked out that that much money would paint 3 models of equal complexity but with fancy metallic paints and with a better finish.

Also; why not just start a new thread? I'd happily contribute to a model building thread, although I suspect everyone would get fed up of Japanese mecha.
Top

Sure, perhaps a mod could split out the last 4 or 5 posts and make a Hobby/Modely/Paintingy thread?

I'm thinking of getting back into my wooden ship model I started buildng years ago but has been collecting dust.
Top

You could just make your own model-making thread?
Between tedium and fright
Such is the song of the nether world
The hissing of rats
And the jarring chants of angels
Top

The hobbies and model-making thread

Re: The hobbies and model-making thread

So yeah, I guess I'll post some examples of what I build. I've been a fan of the Gundam franchise since I was a teenager, and Gunpla, a double portmanteau of Gundam-Plastic-Model, is a relatively huge hobby in Japan. The models don't have any official distribution in the UK, so they need to be imported from companies in Japan (which is relatively easy), and sadly the massive drop in the value of sterling relative to the yen has made these things significantly more expensive. I mostly build the Perfect Grade kits - the big, showstopper models with anywhere between 500 and 1200 individual parts. Here are a few examples: 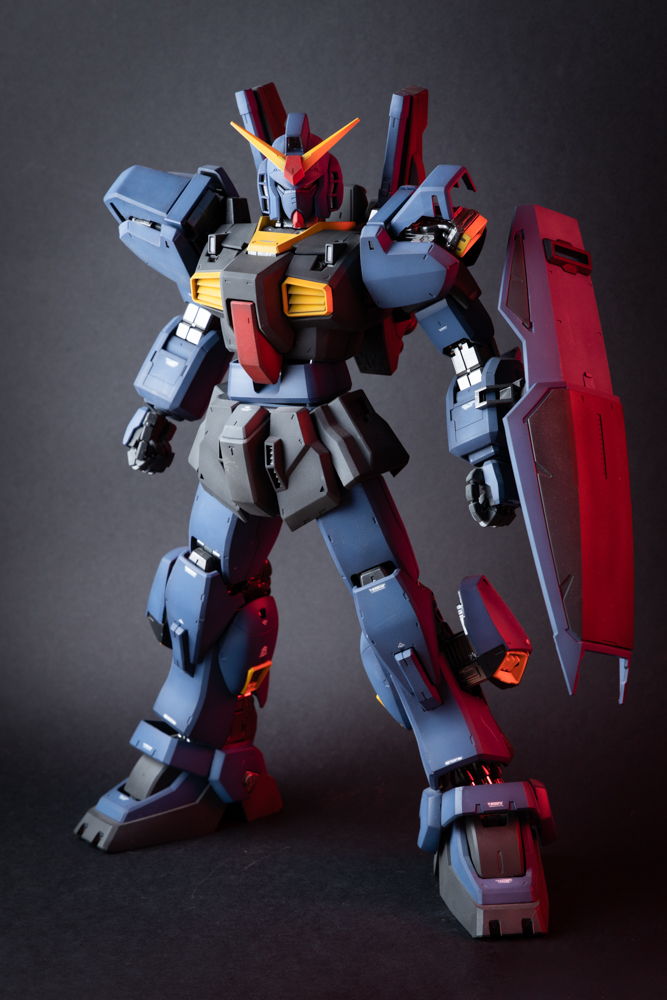 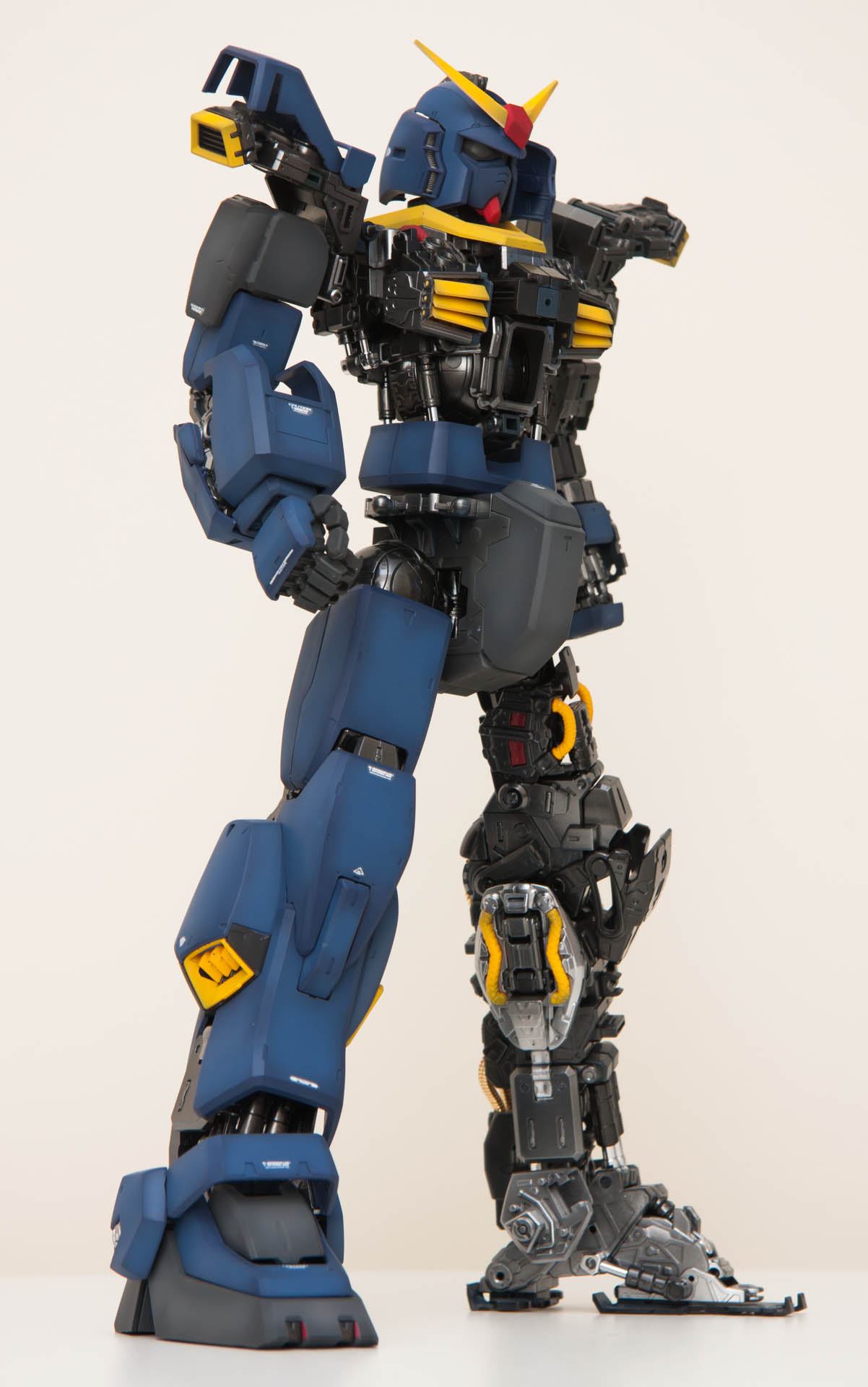 The RX-178 Gundam Mk.II, from the eighties-era series Zeta Gundam. It's big and boxy and solid, and is by far the most complex model I've ever built. It has a fully detailed skeleton with moving pistons and dozens of points of articulation. The model stands about 28cm tall. It does have some rudimentary lighting in the eyes, but this was from an era (early 2000s) where electronic features were something of an afterthought, and the circuit never quite worked in my kit. As with all of my kits, it's airbrushed in a mixture of lacquer colours with Alclad metallics for the frame parts. This was from when I was still trying to nail down my paint brand, and was from a small company called Plamo UK who made great paints, but had the worst customer service I've ever dealt with. 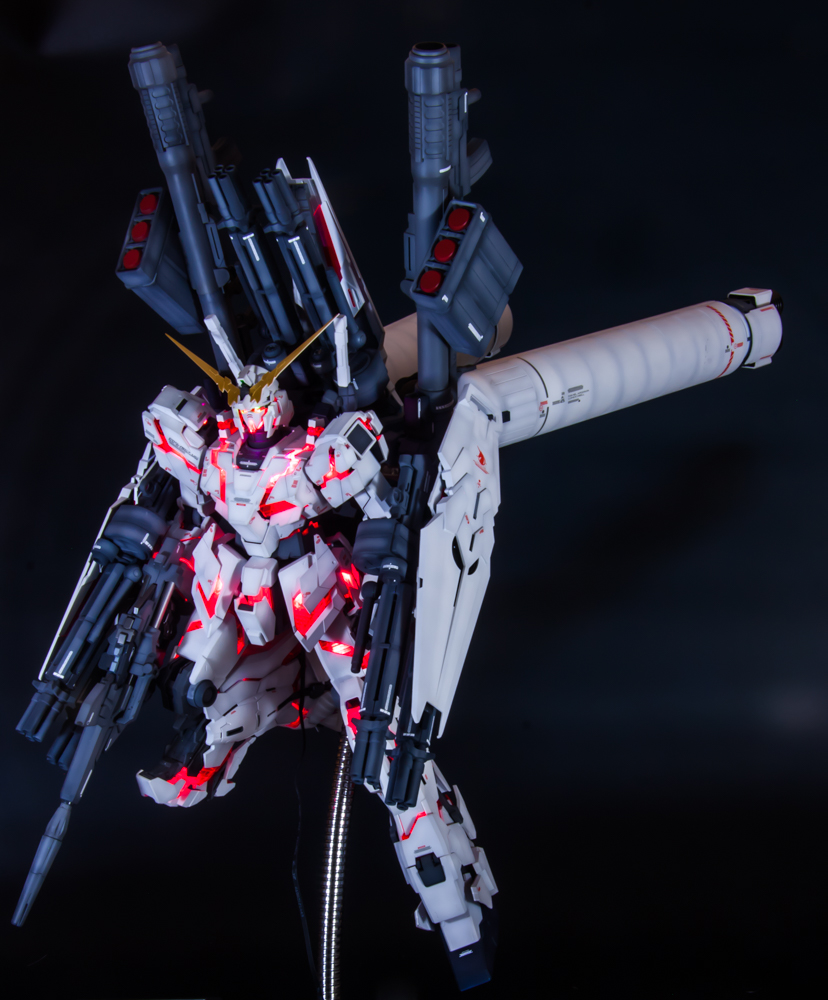 The RX-0 Unicorn Gundam, in the "Full Armor" configuration. This is by far the largest model I've built, with the humanoid part being around 32cm tall, and those massive boosters attached to the back being longer than my forearm. This is the kit that really tested my patience when it came to decals, which I generally find the application of quite therapeutic, but there must be over a hundred on this model (there are six four-barreled gattling guns here, each with 8 decals for a total of 48 just for those alone). It's got a fairly spectacular lighting feature (the in-show explanation for is basically telekinetic space magic), and the entire model is filled with little LED units and a complicated series of wires that snake their way through all of the joints (the frame isn't as complicated as the Mk.II's, but it still bends everywhere you'd expect). This was the model where I really nailed my painting technique down; each armour piece is shaded (it perhaps doesn't show up well in this photo, but the edges of each piece are a little darker than the centre), either through only partially covering the grey primer with white, or with a highlight shade sprayed onto the centre of each part. By this point I'd switched to Tamiya acrylics thinned with lacquer for a near-instant drying (if toxic to apply; you need to wear a respirator while spraying this stuff) and quite smooth finish. 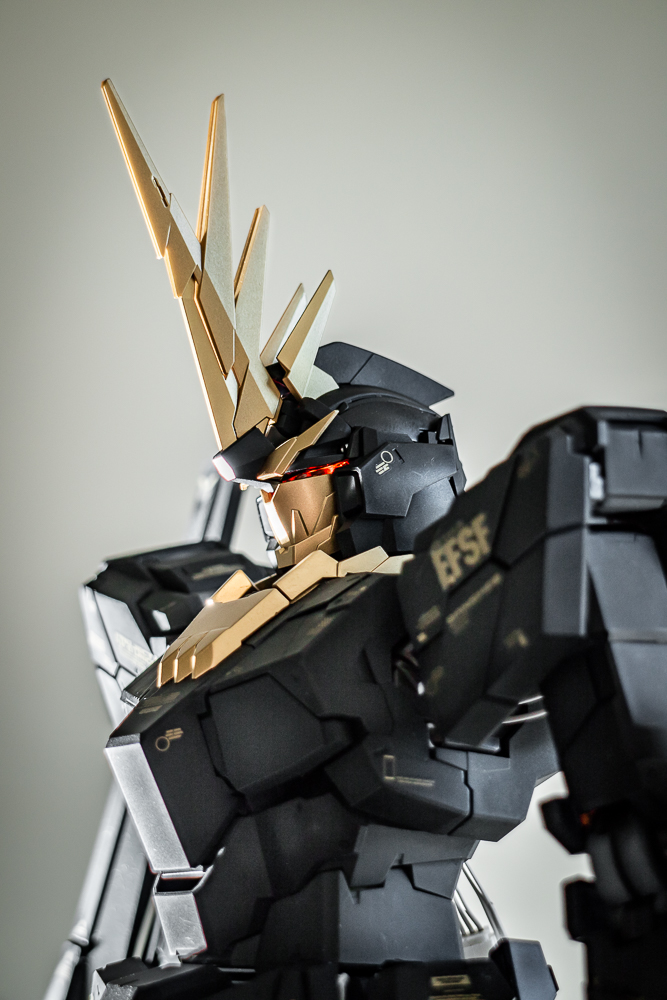 This photo of the Unicorn's sister-unit, the RX-0 Banshee, which is nearly identical in design but with a different colour scheme and equipment, shows how both of these models transform. They shrink down to the standard size of around 28cm, and just about every armour part folds up to cover the space-magic parts when they're inactive. 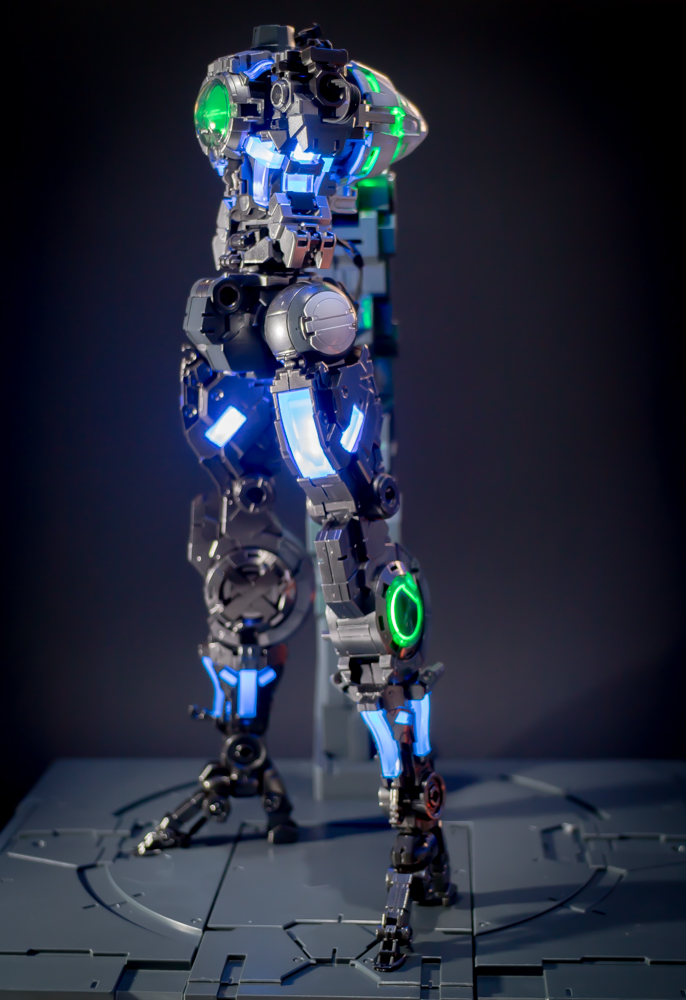 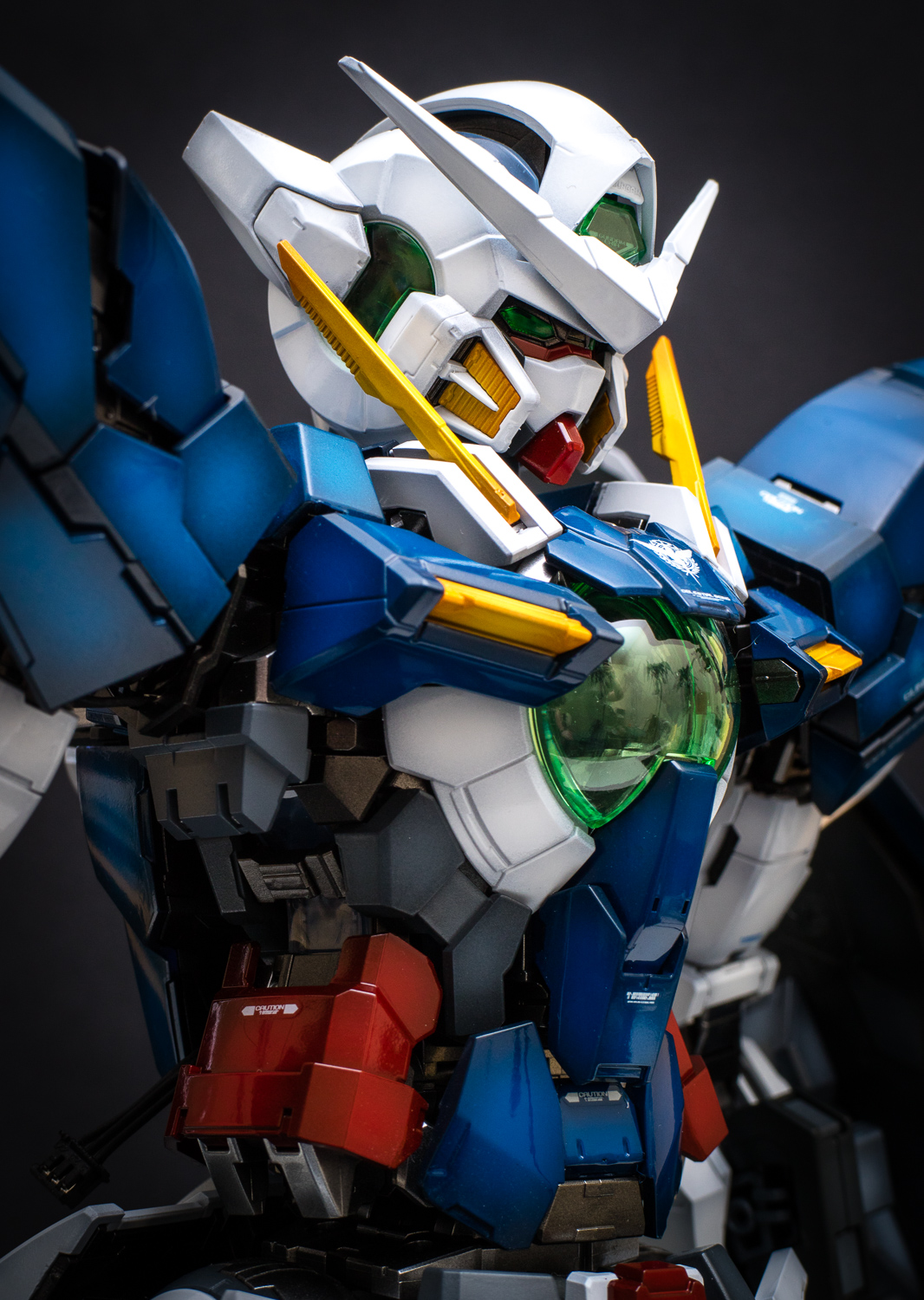 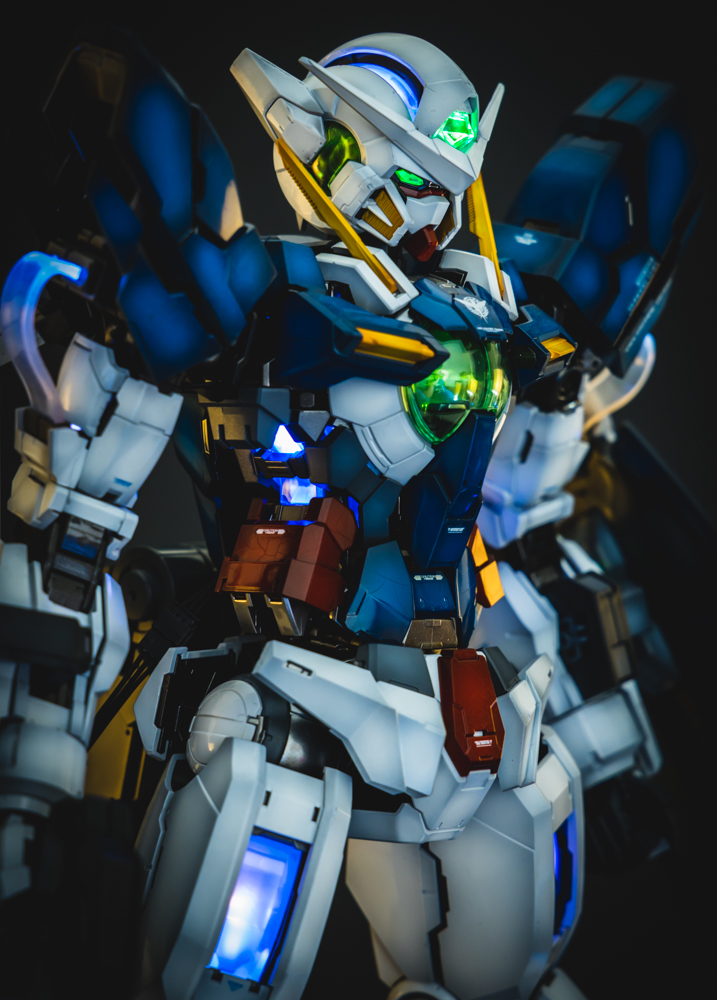 Skipping ahead a few to my latest, the GN-001 Exia. By this point I've gotten my paint work to be just about perfect for my tastes. I've moved on to an extremely glossy finish which I think really brings out the panel detail. It's also much less of a pain to dust, as I don't like to keep these things in display cases (which would be prohibitively large and I like to have these things on my desk). My shading by this point is much more noticeable, as I stuck a bit of extra contrast when I mixed the paints. Generally speaking I go for a gloss primer, a base coat of the paint as bottled but with about 10-20% black added, and then the highlight shade (sprayed only on the centre of each part) is just the paint without the black. For the yellow pieces the base coat has the colour plus about 50% orange added instead of black, then a highlight of white followed by a second highlight of plain yellow (because yellow doesn't cover well by itself).

These things take anywhere from one to four months to build and paint, but frankly I think they look amazing when finished, and they have a ton of posing options. I'm toying with the idea of starting with the next grade down; the Perfect Grades are 1/60 scale, while the Master Grade kits are 1/100 so around half the size, and significantly cheaper and less complicated. PG kits only get released on average every three years and only ever feature the absolute most popular designs, whereas MG kits get between 5 and 10 releases a year so there's a massive number to choose from.
Top

Impressive stuff Raid. You don't see that sort of model making very often - it's nearly always ships and planes on most model forums!

I've been looking over my Space Wolves Terminators I started painting years ago; I finished one completely and half-finished 3 more. But loads of my original citadel paints are getting on for 10 years old now and are mostly dried up.

I'd have to buy a bunch of equivalent paints if I want to get into it again.
Top

Yeah, the UK market has always been dominated by real-life military vehicles, which I seldom care for (although I did build model aircraft as a kid). Mecha just doesn't have the same following as, say, second world war fighter planes, which tend to stir the imagination more. What I think is one of the more striking parts of Gunpla kits is that they require no glue whatsoever; the molding technology and design from Bandai is so much more advanced than the likes of Airfix that everything is snap fit.

There are two kits that I would absolutely love to build, but don't consider myself skilled enough yet to handle; the 1:350 USS Enterprise NCC-1701 Refit from Polar Lights, and Bandai's Perfect Grade Millenium Falcon. They're both massive models (the Enterprise is something like 90cm long), but the paint techniques required are so far out of my comfort zone that I just don't want to ruin one. The Enterprise, if painted to represent the filming miniature from the 1979 film, has multiple layers of pearlescent or iridescent paint applied with very complex stencils to get the hull paneling to look right (the painting is referred to as aztecing). It needs an absolutely perfect finish to look right. The Falcon however is very much the opposite, requiring heaps of weathering techniques that I just don't have much experience with, and the kit itself is something like £300 at current exchange rates.

For the latter, I actually have a second PG Exia Gundam kit, along with the optional parts set to turn it into the very beat up Repair configuration, that'll also require a lot of weathering to get right. Currently I don't have the space to build a kit of this scale, and I'm waiting to move into a new home that'll give me enough room to set my paint booth up, so it's going to be a while before I can crack on with it.
Top

Also, the problem with 1/350 WW2 ship models is that almost all of them are the same kits that have been around for donkey's years. Tamiya make some awesome US/Japanese ships, but they have the same limited range they had in the 90s. Same for Airfix/Revell to some degree.

I guess it's more cost-efficient to maintain a limited range. Plastic ship model making isn't exactly a booming money-maker. I was just surprised recently at the small choice when looking around for a potential new quality kit build.

That Tomcat I made was by Hasegawa, and I wasn't too impressed with aspects of the kit. Turned out well, but it was harder work than it should have been due to issues with the design of certain parts. Probably won't make one of their range again.
Top

Yeah, the variety is one of the reasons I love Bandai models so much (and desperately wish they had the license to distribute their fantastic Star Wars kits over here, but I think Revell have the Star Wars rights here and in North America). I think the problem is that the molds for injection molding are unbelievably expensive (at the upper end, Lego spend six figures on theirs), so for a model to be commercially viable with the limited customer base, the model needs to be produced for years. Bandai have the advantage that they've sold half a billion kits since the eighties, so they can afford frequent new molds giving them developmental pace that other companies simply can't compete with.
Top

Any chance you could paint up a 1/72 Tom Cruise to put in the cockpit?
Between tedium and fright
Such is the song of the nether world
The hissing of rats
And the jarring chants of angels
Top

While you're at it, may as well do a tiny piano with Anthony Edwards playing Great Balls of Fire.
Top

Tom Cruise is so small he would probably fit in the model cockpit anyway.

While making it, it made me realise how absolutely massive the F14 was when looking at the tiny seats. The amount of thrust it needed from those 2 engines just to get it off the end of the flight deck - even with the catapult - was insane.
Top
Post Reply
55 posts