Stormbringer wrote: ↑
Tue Oct 15, 2019 1:30 pm
I'm eyeing up another game which I intend to buy next month in the hope that it will get my sons back into board gaming again: 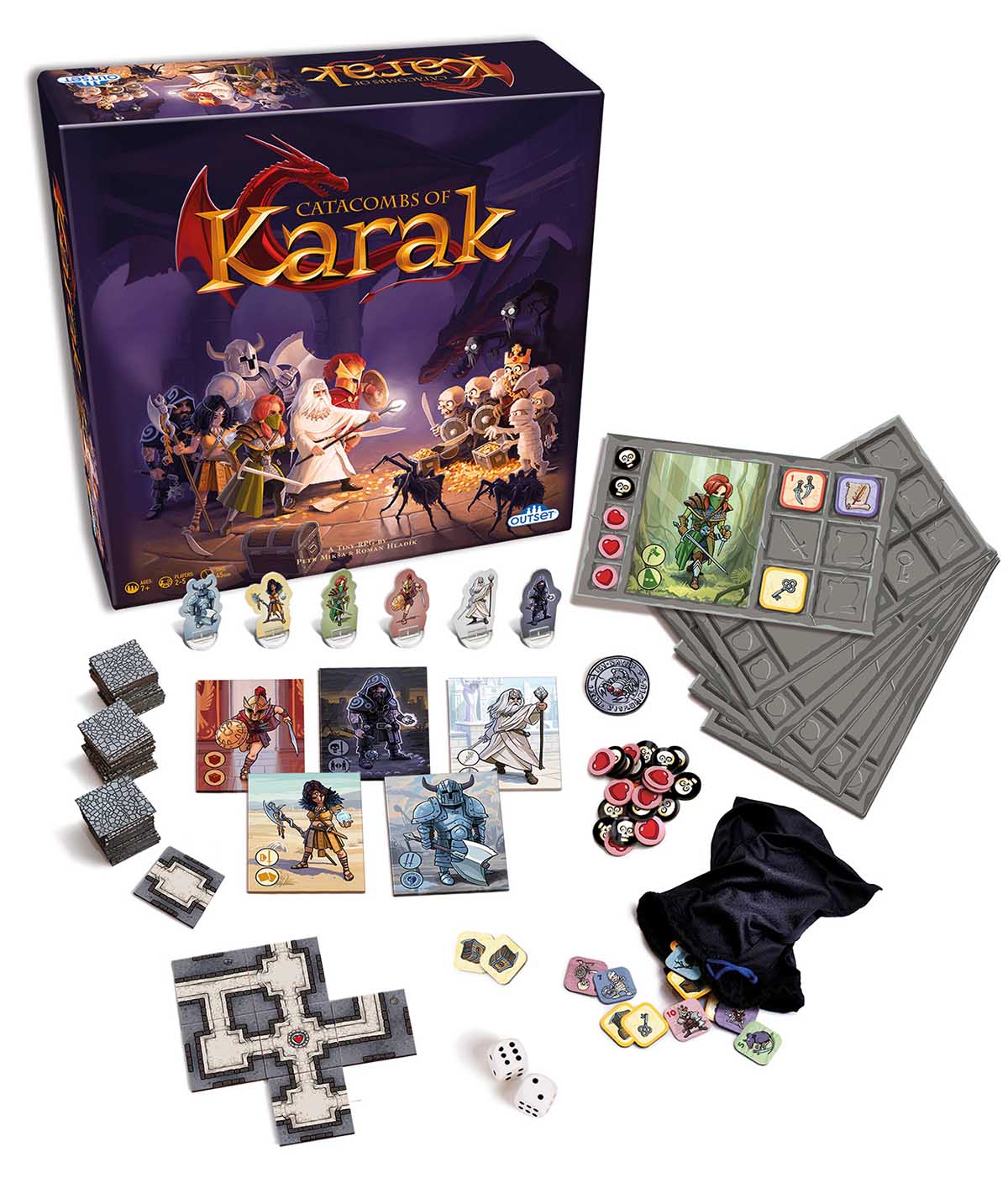 Catacombs of Karak is a very light, child-friendly, dungeon-crawler RPG, which seems like a hybrid of Talisman and DungeonQuest, which is something that strongly appeals to me.

That looks really intriguing, so much so that I'm thinking about buying it for our eldest this Christmas. One question though, where would you buy it from? It doesn't seem to be readily available from a very cursory search online.

Just ordered this from Amazon.com. £34.88 including shipping, seems a pretty good deal to me.

I intend to film and publish the first English language review of this game.
Between tedium and fright
Such is the song of the nether world
The hissing of rats
And the jarring chants of angels
Top

Sounds good! I take it you're uploading to Youtube?

Look forward to it.
Top

I will, yes.
Between tedium and fright
Such is the song of the nether world
The hissing of rats
And the jarring chants of angels
Top

I struggle to speak coherently at the best of times, but apparently I'm even worse in front of a camera, so I might just produce a written review of this game instead...
Between tedium and fright
Such is the song of the nether world
The hissing of rats
And the jarring chants of angels
Top

Stormbringer wrote: ↑
Tue Nov 12, 2019 6:00 am
I struggle to speak coherently at the best of times, but apparently I'm even worse in front of a camera, so I might just produce a written review of this game instead...

I'm keen to know your opinion having played it, I held off ordering from the States in the end as shipping nearly doubled the cost of buying it, but I'm still considering it for Christmas.
Top

That's cheaper than some board games you buy here!

I'll definitely get my review written ASAP.
Between tedium and fright
Such is the song of the nether world
The hissing of rats
And the jarring chants of angels
Top

Hey Doug, I was just wondering if you'd had a chance yet to try out the game? I'm still wavering and may get it for Chrimbo if it's really good.
Top

Yes I have; I've played it several times with my sons (6 and 7) and they really enjoy it.

I actually decided to film a review after all and I'm currently in the process of editing it. I hope to have it ready by the end of the week.
Between tedium and fright
Such is the song of the nether world
The hissing of rats
And the jarring chants of angels
Top

Nice, will be sure to check it out.
Top

I'm having trouble making the video as I don't have access to decent video editing hardware/software and the stuff I was using isn't really cutting the mustard. I'm also not very talented at this sort of thing, despite supposedly being trained in it, so I guess I'll stick to what I do best: writing!

Catacombs of Karak feels like a hybrid between Games Workshop's Dungeonquest and Talisman board games (with perhaps a touch of Ravensburger's Labyrinth, though I've never actually played that one), all combined into an ultra-slick, ultra-streamlined, light-hearted dungeon exploration/racing game that is clearly designed for children aged around 6-10. Adults may appreciate it too if they don't get too hung up on its simplicity, but it's really a children's game, or a game for adults to play with children.

You and up to four other players choose a character from the following selection:

Each character has two unique role-appropriate abilities which give them an edge in certain situations. For example: the Warrior gets to re-roll his combat dice if his first roll isn't sufficient, and the Wizard gets to walk through walls.

You take it in turns to move around the catacombs, exploring corridors and rooms which are randomly drawn from a dungeon-tile stack and laid out in an ever-expanding maze. Certain corridors have magical gates that allow you to teleport from one to another, others have healing fountains where you can restore your health, but most of the corridors are empty. That said, there are not all that many corridors, for most of the dungeon tiles are rooms. Each time you find a room, you draw a random token from a black bag. This token will be a monster or a treasure chest. If it is a treasure chest, and you happen to have a key, you can unlock the treasure chest and add it to your personal treasure stash. If it is a monster, it will be one of the following creatures: a giant spider; a giant rat; a skeleton jailer; a skeleton warrior; a skeleton king; one of "the fallen" (scary-looking wraiths) or the big boss: a red dragon!

Whenever you bump into a monster you have to fight it, unless you have a special ability that allows you to avoid it. Most heroes have at least one special ability which enhances their combat chances in a unique way, but generally you fight monsters by rolling 2d6 and hoping to surpass the monster's combat value (a number somewhere between 5 and 15). If you succeed, you kill the monster and take what it was carrying, which will either be a weapon, a spell, a key (which unlocks treasure chests), or treasure. If you tie with the monster's combat value, you retreat one tile and your turn ends. If you roll less than the monster's combat value, you are hurt, which forces you to both retreat and lose a life point. Each hero has five life points. Once they're drained, your hero passes out and spends their next turn recovering one life point. There's no player death in this game -- the worst thing that can happen is that you have to skip a turn while you heal.

Sooner or later, somebody will encounter the dragon. This beast is very hard to kill, and your character will have to be fairly buffed up with weapons and spells (taken from lesser monsters along the way) to have any chance of succeeding. However, killing the dragon does not ensure victory for the slayer. The game ends when the dragon dies, yes, but the player with the highest amount of treasure is the actual winner. Therefore, the game is really a race to find as many keys and unlock as many treasure chests as you can before somebody kills the dragon. The dragon itself guards a treasure of higher value than usual, so there is an advantage to killing it yourself, but this can be negated if another player has found and unlocked more chests than you already. The fact that the game is a race quickly becomes apparent, and once you've got the best weapons you can, every move you'll make will be aimed at beating your fellow players to the treasure before somebody takes down that dragon. There are various means of outpacing and delaying your opponents, and soon your children will be fiendishly deploying these tactics against you as often as possible.

The components of the game are top-quality. I don't think I've ever seen a game at this price-point which such loving care and polish put into every little detail. The artwork is cartoonish, but nice, the card-stock is thick and sturdy and the draw-string bag in which to store the monster tokens is also very high-quality. One of my favourite features is the player mats where you store your items, life-points and character card. Each mat has indentations in which your tokens and cards snugly fit, which adds an extra layer of luxury to the whole experience.

My only criticisms of the game are that the dungeon tiles have no way of connecting to each other, so tend to slide around a bit once the maze starts growing, and you may have to constantly re-adjust them to keep things in line (especially when excitable children are about). The other complaint I have is that it's a little too easy (from an adult perspective). It's actually quite hard to get hurt, and the low-level monsters feel a little too low-level, in that once you beat them and are immediately enhanced with weaponry, you'll quickly find yourself mostly unchallenged by any monster until "the fallen" or the dragon appear. The plus side of this is that combat doesn't feel like a painful grind; characters can buff up relatively quickly and concentrate on finding those much-needed treasure chests in order to secure a victory.

If you're looking for a way to introduce kids to the basic concept of dungeon-crawling and RPGs, but with light, elegant rules, and the idea of racing each other to collect as much treasure as possible sounds fun, this is an excellent recommendation from me.
Between tedium and fright
Such is the song of the nether world
The hissing of rats
And the jarring chants of angels
Top

So, gonna buy it?

Thanks for the write up. I think I will probably hold off for the time being. I feel like I want a bit more of a narrative experience, more like a co-op mini D&D style game. Spent a long time browsing last night but not quite seeing what I'm after. As a cheap alternative I did buy the Dragonwood card game, which sounds like it could be fun
Top

Dragonwood is indeed excellent fun.
Between tedium and fright
Such is the song of the nether world
The hissing of rats
And the jarring chants of angels
Top

Though I wouldn't say it offers more in terms of narrative...
Between tedium and fright
Such is the song of the nether world
The hissing of rats
And the jarring chants of angels
Top