* which I am totally up for btw

Remote video conferencing? Is that what the cools kids are calling Skype these days?
Top

I have no idea

I was thinking of those virtual meeting rooms, where there's a screen on one wall that looks like it's part of the same room and that you're all sat together.

I haven't played Gloomhaven, but it does look very interesting. My games collection is definitely at breaking point now though so anything new I want to buy has to come at the expense of something else going. There's only so much shelving I can physically fit in my flat.

BTW WB, just noticed one of the Youtubers I follow just started a Gloomhaven PC campaign, could be worth a gander:

I'm certainly keeping an eye on it. It looks like you can play a procedurally-generated campaign at the moment, but the proper campaign will be with the full release next year.
Top

I may have pre-ordered Warcry (GW's new skirmishy game).
The models look awesome, it's a bit Kill-team/a bit Necromunda (apparently) in AoS.

Speaking of Kill Team, I've nearly finished painting my team, just some arms for the magnetised warriors, a few gaunts and a few gant

Meet boss gribbly, he enjoys long walks on the beach and devouring biomass.
(Spoilered because GIANT picture that I cannot be arsed to resize it 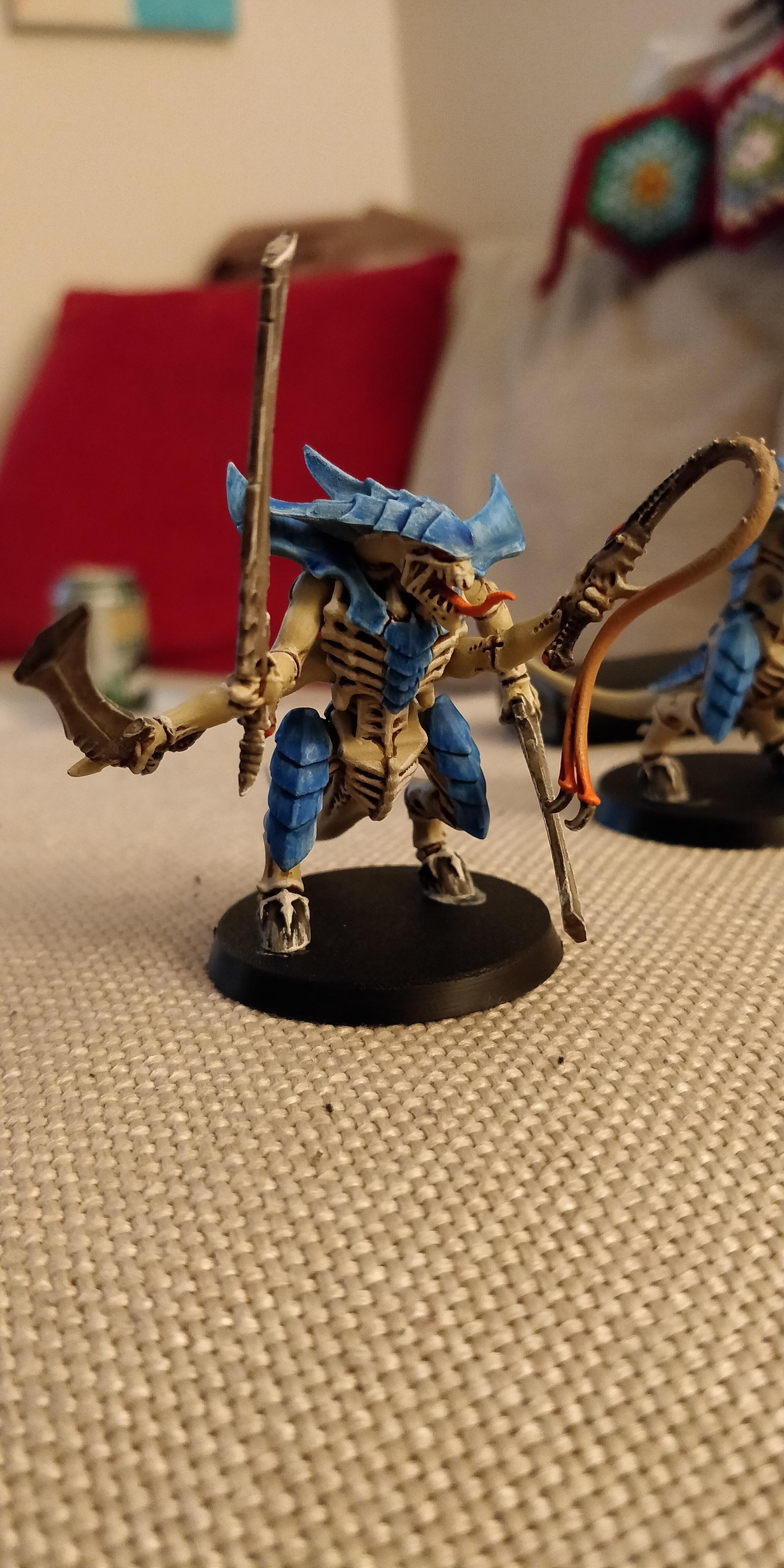 If anyone's interested, I've started doing a play-test/run-through of Advanced Hero Quest: Prince of Persia Edition here.
Between tedium and fright
Such is the song of the nether world
The hissing of rats
And the jarring chants of angels
Top

Nice, although naturally I'm devastated you're seeing another forum behind our backs.

Well, I didn't want to post masses of images in this thread. I suppose I could start a blog thread about it?
Between tedium and fright
Such is the song of the nether world
The hissing of rats
And the jarring chants of angels
Top

Just a joke! But always happy to read your stuff

... I sold this on eBay a couple of months ago. ¬_¬
Between tedium and fright
Such is the song of the nether world
The hissing of rats
And the jarring chants of angels
Top

We had a couple of my wife's friends from Georgia (the American state, not the Eurasian country) stay with us over the weekend while they did a tour of Scotland. They asked if we could play a board game together in the evening. I realised to my horror that I had sold all of my board games on eBay and had nothing to offer!!!

I quickly remedied this by making a same-day delivery order for a copy of RISK: Vikings Edition

Now, I'm not the biggest fan of Risk, but my wife loves it and so has been asking me to buy a copy for a while. I ordered this mostly for her enjoyment rather than my own. However, I did quite like it. Our friends enjoyed it too, so it was a successful purchase overall.

I usually try to avoid "themed" versions of classic games, but I liked this version far more than any other edition I've bought in the past. It limits the area of conquest to North-West Europe, rather than the entire planet, which gives it more of a realistic feel, and has a pretty awesome mechanic where you can sail a dragon-ship full of troops from any coastal region to another, so it's easy to be taken by surprise when a ship suddenly lands at an unprotected border and suddenly what seemed like a secure territory is now in the hands of your opponent!

I also bought this the following day: 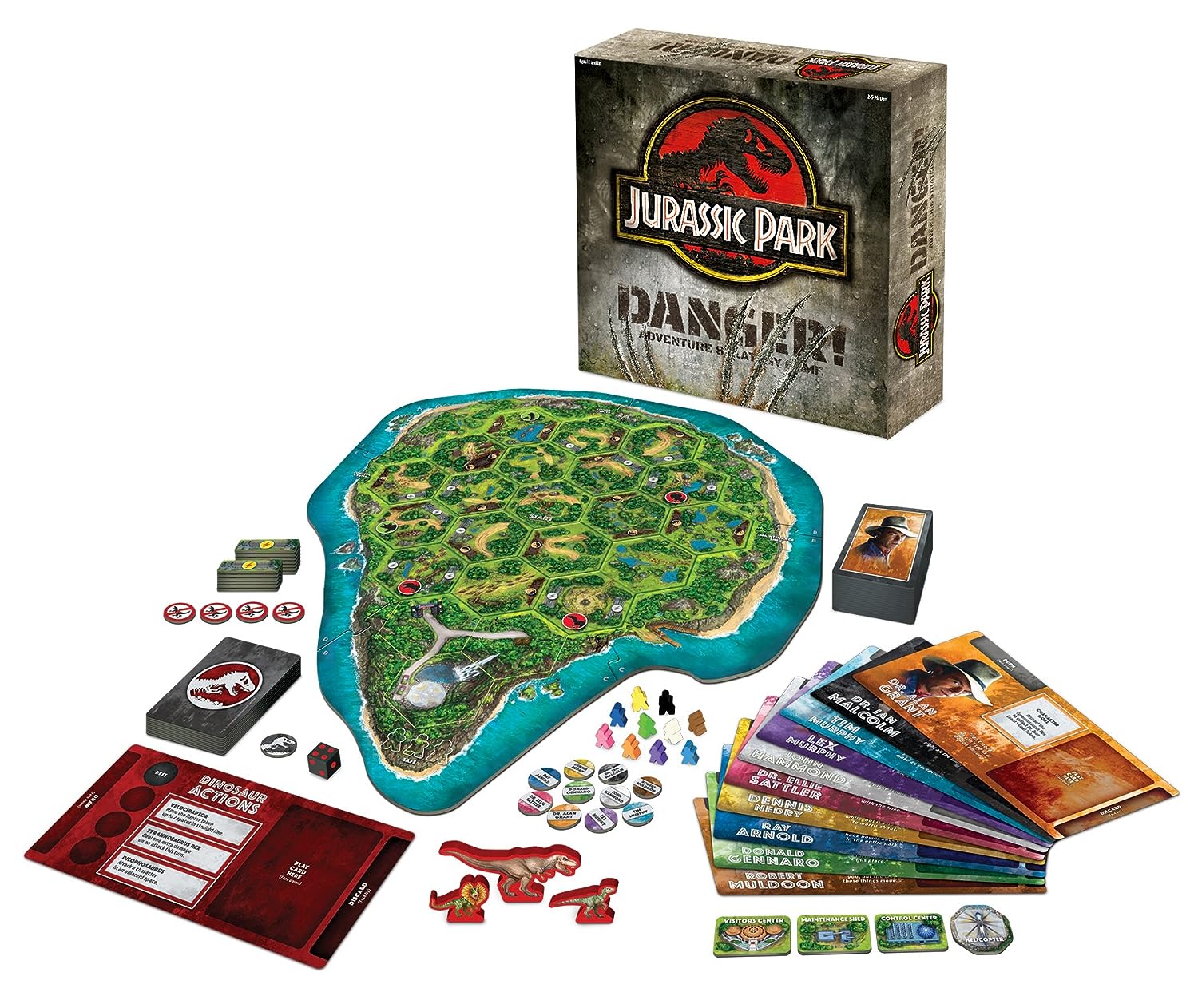 Jurassic Park: Danger! is a pretty fun game where one player takes on the role of the dinosaurs (three to be exact: T. Rex, Velociraptor and Dilophosaurus) and the rest of the players take on the roles of the main characters from the original 1993 film. You can even play Dennis Nedry or Donald Gennaro!

The idea is that the humans have to move about Jurassic Park escaping/evading the predatory dinosaurs and get the power back on in three different locations (Visitor's Centre, Control Centre and Maintenance Shed) in order to call for the helicopter to arrive and literally "GET TO DA CHOPPAH" before they're eaten by the dinos. However, each human character has a personal goal (usually related to something they did in the film) that they have to perform before escaping. For example, Ellie Sattler has to help heal the sick Triceratops and Ian Malcolm has to prove that Chaos theory is true. These sub-goals seem a little strange when NOT BEING EATEN seems like a higher priority, but they do add a little flavour and amusement to the game. The dino player has to try and eat them before they achieve their goal and make it to the chopper alive. It takes a little while to learn all the rules, but once you get them, they're pretty simple to follow and after that the game is excellent fun indeed. Plenty of opportunities to quote lines from the movie, which we did a lot!

One thing we found particularly hilarious is the outcome of the game can drastically alter the story so that you can end up with a scenario where, for example, Tim Murphy is eaten by the T. Rex, while Lex makes it to the helicopter with Dennis Nedry and Ian Malcolm. Strangely, only three humans can be saved, so the movie scenario where Grant, Sattler, the Murphy twins, Malcolm and Hammond all make it out is not possible to recreate. But that only adds to the hilarity.
Between tedium and fright
Such is the song of the nether world
The hissing of rats
And the jarring chants of angels
Top

I quite like the idea of Nedry, Muldoon and Hammond scarpering to the helicopter and leaving the rest to their deaths.