Over the next few months, I reckon I'm going to have a little more spare time on my hands and I was wondering whether anyone would be interested in me running another forum RPG/boardgame? Akin to last year's Advanced Heroquest sessions.

Only this time, I was thinking about... 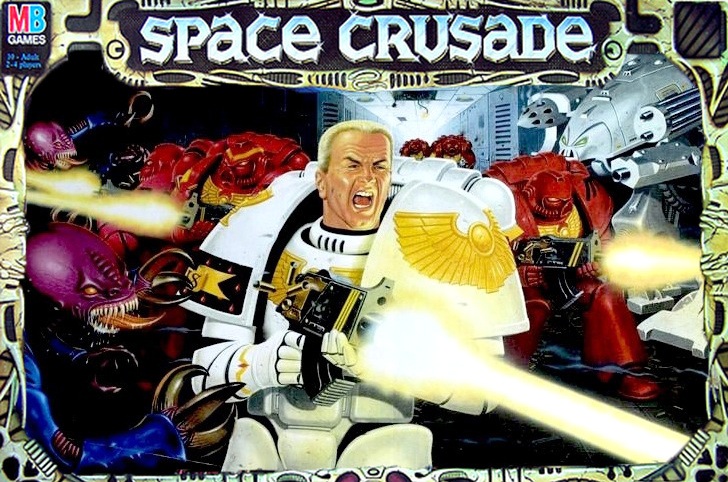 I haven't put any thought/planning into this yet, so don't worry if there aren't enough takers. I would need either 2 or 3 (max) of you to make this work, and each of you would be in control of your own squad - competing against eachother for the most points on each mission against a variety of space bastards: 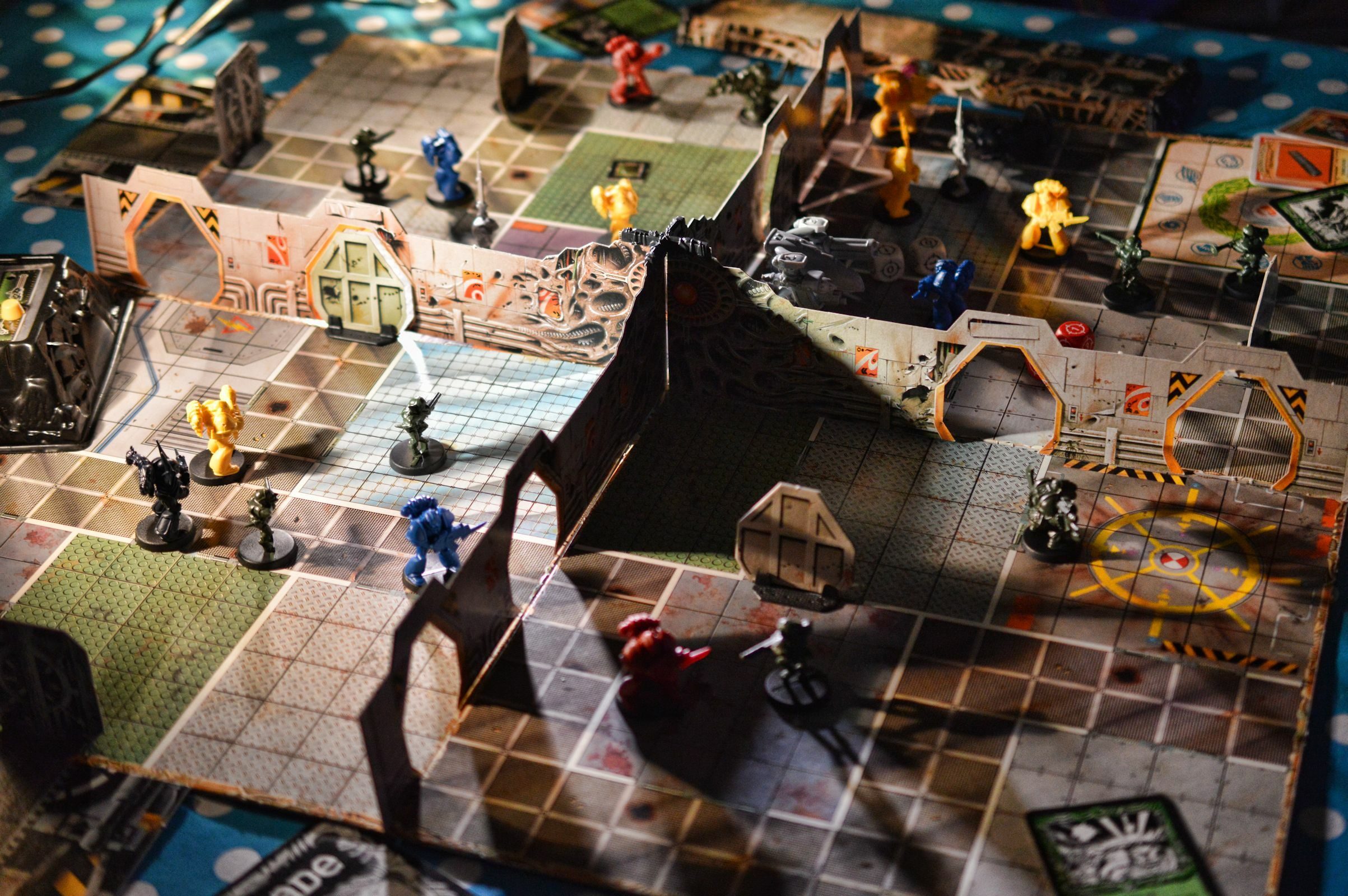 It would be a top-down representation again, like last time. Plus, the missions should in theory take less time to go through (and generally be less fiddly) than that AHQ quest we did. I'll give you all a few days to let me know if there's any takers.

Of course, there is a chance my plans might all change and I end up having to ditch the idea, but for the time being let's assume it's something I can start a few weeks from now.
Last edited by Maturin on Wed May 22, 2019 10:21 am, edited 2 times in total.
Top

I'm always up for anything, me

Never played this before, but happy to give it a go!
Top

Cool! I remember having great fun with it as a teenager, I think it would work pretty well as a forum game. It's more snappy and faster-moving than AHQ.

The only thing is the game uses its own combat dice, so we'll have to convert the D6 results. I'll find a solution to that pretty easily though.
Top

Definitely up for this. Would it be a case of devoting a few hours of an evening to monitoring the forum and making moves in quick succession like previous boardgames we've played?
Top

Yeah, I think we could do the 8-11pm routine again. Turns move very quickly, so we might even be able to complete 1 mission per evening session. (Perhaps over 2 sessions if there's 3 squads of you playing instead of 2).

The game has a bunch of missions in a campaign, and each mission has an objective.

I love AHQ dearly, but it is rather intricate for a forum game in comparison.
Top

I will definitely lurk

If it doesn't require voice comms or anything fancy I'd be up for it. Emperator Trussicuss Ironshafticus could slaughter his way through a space hulk.
Top

Great! With AnimalMother joining the collective that will make our 3 squads which will be cavorting around the Imperium. Plus a lurking Snowy.

Expect more details to come over the next couple of weeks.
Top

Is this like Space Hulk? 'cos I've played that, back when. I also lack voice comms for the moment.

There'll be no voice comms required; it'll all be done inside the forum posts. (I'll upload the map at the end of each turn with the changes)

It's similar to Space Hulk in some ways but it plays very differently - mainly with the fact you're fighting 2 battles; 1 against the aliens and the other against fellow Space Marine squads for points. For example you can choose whether or not to allow another player's squad member to pass through one of yours - so you could decide to block a corridor and stop them from attacking an alien, so that you can attack them yourselves next turn and get the points instead. Or you can work together.

The squad with the most points at the end of a mission wins and gets promoted. I think you need 4 or 5 promotions to win the game, as long as you keep your commander alive...

Found some nifty updated game boards online (along with all the original scanned game cards) and I've made some counters up for the marines/enemies. This is what it'll look like (the map will be different each mission): 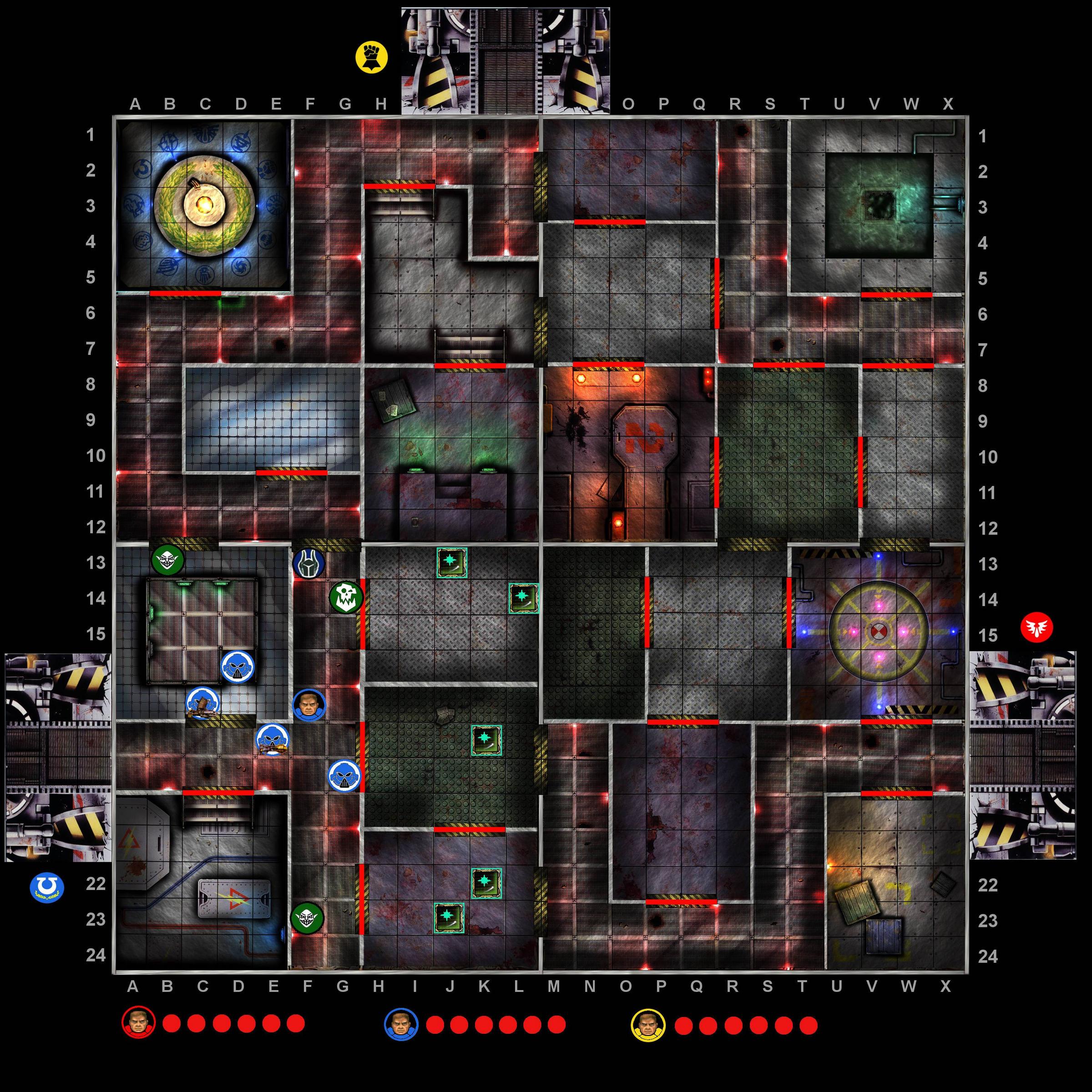 I'd never heard of this before now. Space Hulk is a classic but adding an adversarial element to it with Marine teams is a much cooler idea.
Top

I personally enjoyed Crusade more than Space Hulk when I was younger, but I think the general consensus was that Space Hulk was a bit more refined - Space Crusade doesn't have overwatch for example. But I always found both games equally tense.

The general idea here is to not get too attached to your 4 marines.

Your commander has 6 life points to their 1, and has access to some mighty hand-to-hand weapons. The rest are just fodder. Typically, if you can make it back to the docking claw with 1 or 2 of your marines alive you'll be lucky. Sometimes you'll be deciding not to go for the primary objective so your commander can live another day, other times you'll be sacrificing all your marines to get that promotion.

If you finish a mission with 3 or 4 of your marines alive then you've probably played it too safe. You want each marine to get as many enemy kills as possible before their inevitable death.

Some point at the weekend I'll be putting up an Intro/Rules thread which will fill you all in on how the game works.
Top

I'd love to get involved, but I just can't give a lump of time to anything right now

It's going to be interesting to see how it plays as a forum game. It's mostly competitive instead of co-operative, so it'll be quite different to Advanced Heroquest.
Top

Can it escalate into a full on free for all where everyone becomes a threat? That sounds like a lark.
Top
Post Reply
15 posts • Page 1 of 1