So a couple of years ago I bought a 3D printer, another entry in the startlingly long line of expensive things I've bought and then never used enough to warrant their price tag. It was an XYZ Junior, a model that any 3D printing enthusiast would tell you to avoid (more for the silly DRM functions baked into their filament spools than the actual quality of the printer itself). It is what's referred to as an FDM printer (for fused deposition modeling); it prints by melting a spool of plastic filament, and depositing it onto a build plate, building a 3D object by effectively drawing 2D shapes on top of one another. Here's a thing I designed and produced using it: 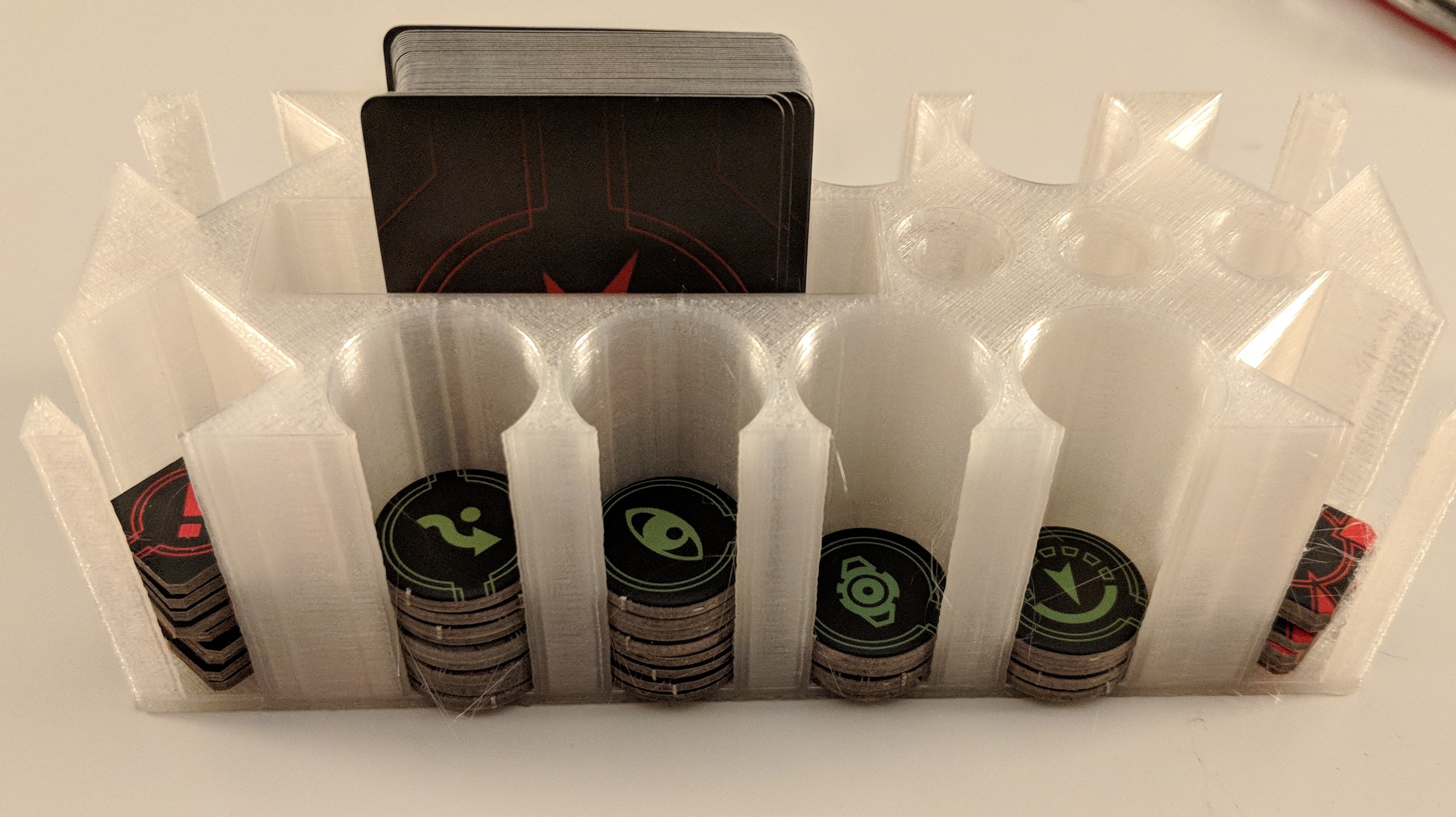 It's a holder for the various tokens used in the X-Wing Miniatures game. I actually designed the piece using Windows 10's built in 3D modeling software that, much like MS Paint, ridiculously basic compared to other software. It's a bit crap, but as a first attempt at industrial design I don't think I did too badly.

The problem with the XYZ Junior is that each individual layer is very obvious; it effectively has a very low resolution on the z axis of 0.3mm (the minimum height of each layer). As the bottom-end of the FDM market, that's not surprising, but unless you spend a lot of money, you're not going to get very fine detail with this technology at present.

Enter the new machine, an Anycubic Photon that I bought at the weekend and used for the first time today. 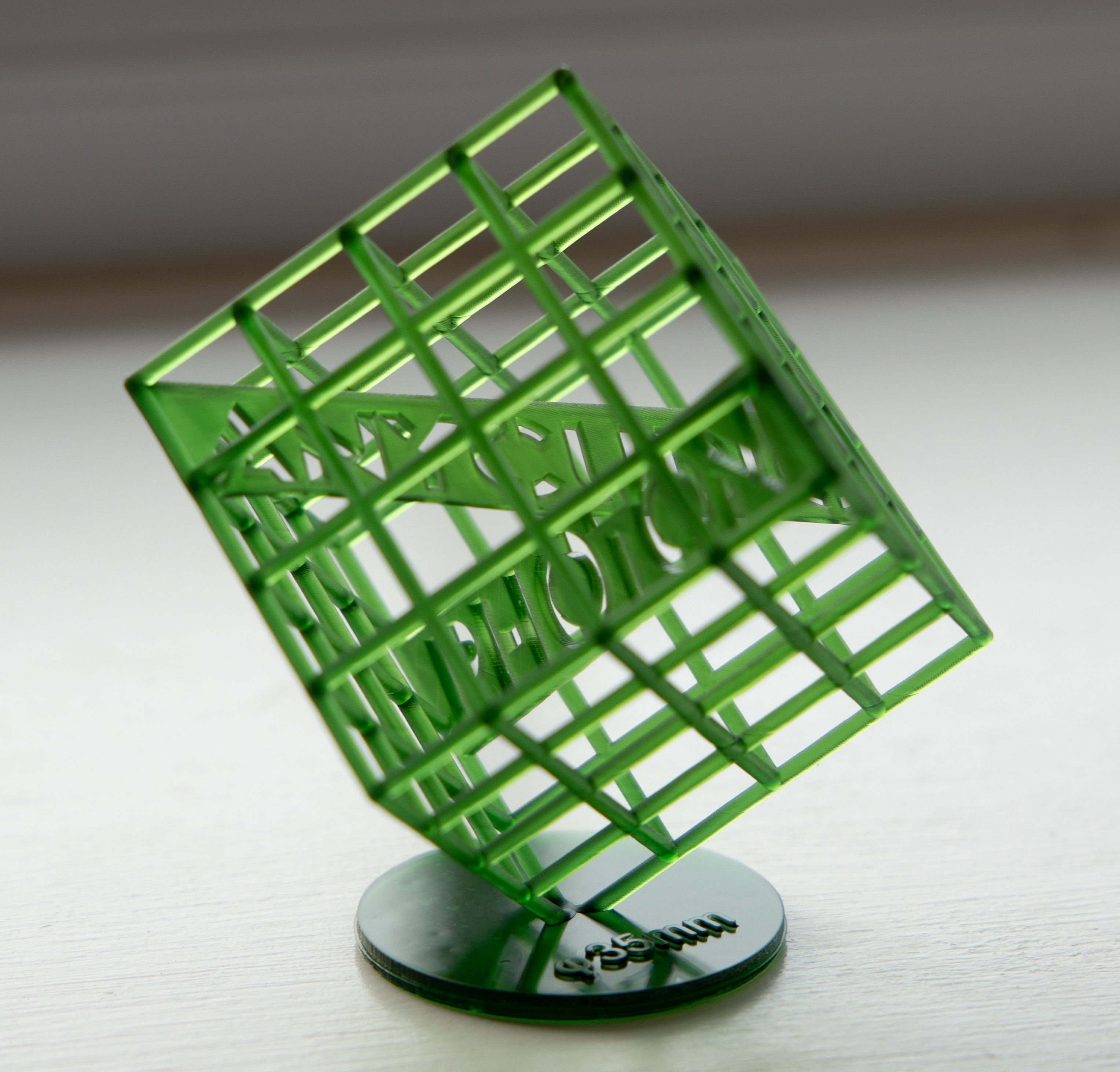 This is the included test print that ships with the machine. It's a lattice cube with the name of the printer through the centre at two different angles. This is a design that's basically impossible to produce in one piece using traditional manufacturing methods.

This is what's known as a DLP printer (for digital light processing). This one works by submerging the build plate in a vat of resin, then shining ultra-violet light up through an LCD panel that cures the resin in only the spots the machine chooses. Each layer builds up on top (technically underneath) of the last in the same way as on the FDM machine, but instead of drawing a shape, the entire layer is cured at the same time. It's *much* higher resolution on the z axis, with a minimum layer height of 0.025mm.

While the FDM printer uses solid spools of plastic as the raw material, the liquid resin that the DLP printers use is much less convenient. It's toxic in its liquid form so you need to wear gloves at all times, and you need to use 99% alcohol to clean everything afterwards. You also need to stick the finished piece under a UV lamp (or strong sunshine, if you don't live in the north of England) afterwards to finish the curing process.

My first project is this: 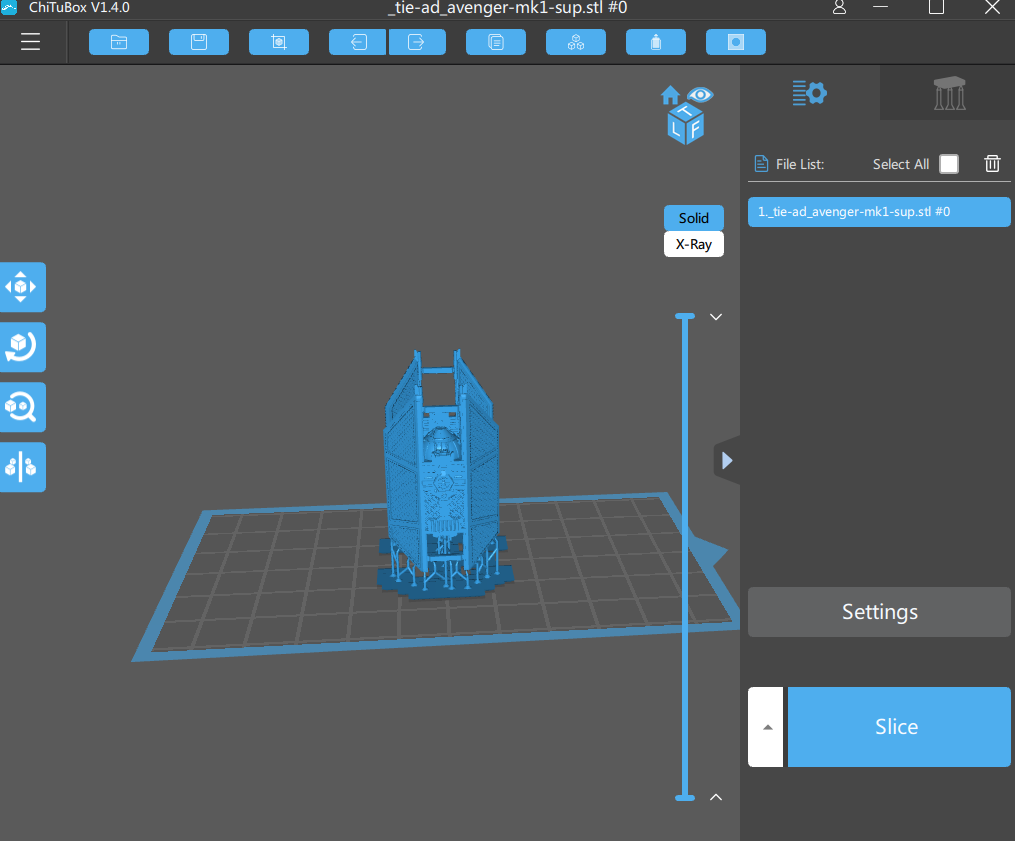 It's what was referred to as the TIE Advanced in the X-Wing PC games, later retconned as the TIE Avenger to differentiate it from Vader's TIE Advanced x1. It's going to be a model used in the X-Wing Miniatures game. The intention is to paint it and attempt to detail it in the same manner as the official models are. After that I've got a YT-2000 (the Otana from the family missions in X-Wing Alliance) and a Missile Boat (from TIE FIghter) to have a crack at.

And in the future I'm going to try and learn to create my own models in Blender. I've taken the first steps today, but I expect that'll be a lengthy process.
Last edited by Raid on Thu Jun 27, 2019 5:59 pm, edited 1 time in total.
Top

I've got access to the 3D printers at work now (Ultimakers 2 and 3) but haven't had the time to go in and actually print anything. I'm also mostly planning to use them for board game related bits and pieces.

That new machine looks like it does a fantastic job, but christ it sounds like a lot more effort!
Top

It's not really difficult to clear up after, just a bit time consuming. It's still a bit of a ballache, but you just can't get this sort of result with other printers in this price range.
Top

So, yeah, it did pretty well for a first attempt. 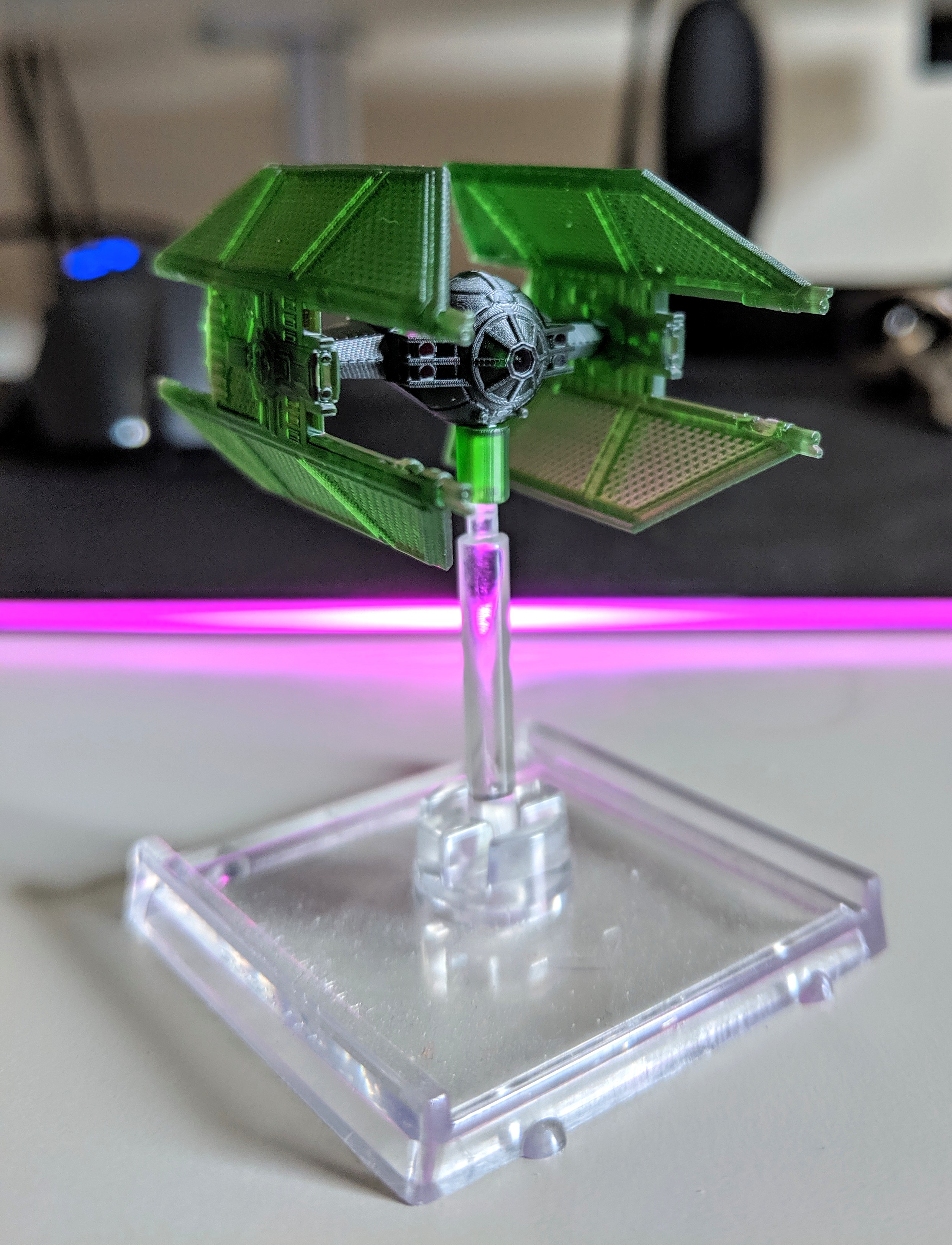 The detail is pretty great, even the barrels in the laser cannons on the wing tips are hollow, and the solar panel detail is really crisp. The only negative is that at some point during the print, the bed (a base layer of sorts that you can see beneath the TIE in the image from the first post; you need a large surface area to adhere to the build plate) became detached from the build plate at one side, and the rear of the right wing is slightly misshapen. 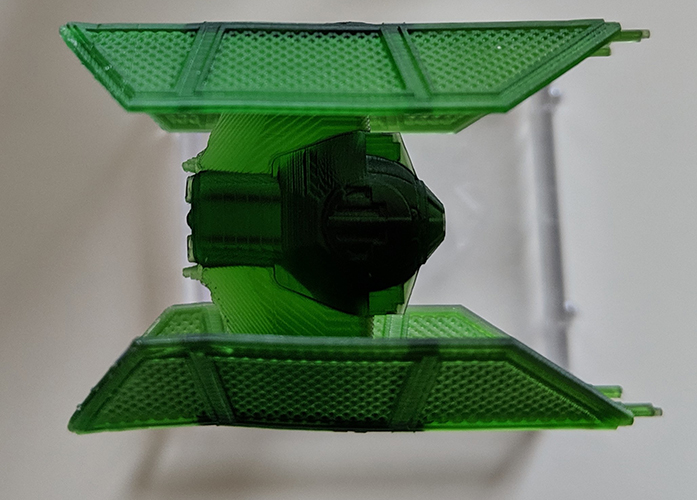 It's actually not much worse than the fairly common warped plastic defects in the official XWM models (which I imagine are injection molded).

While you can see the layer artifacts in these photos, they're really not very obvious in person (this model is only an inch or so wide, so it's magnified here). I'll see what it looks like when I spray some sort of primer on it. I've got a Missile Boat printing as we speak, I'll see if that has the same issue.
Top

Edit
“Most impressive”
I used to be eVoL but I got better.
I like everything now.
Top

I am so tempted to get one of these.
Top

The Missile Boat didn't work after two attempts. I didn't know what happened the first time, but it didn't stick to the build plate, so all that happened was I got a congealed lump of resin on the transparent bottom of the resin tank. I cleaned everything and tried it again with the same file (just to check it wasn't a random failure) and got the same result. I've gone back into the slicing software (which you use to turn a basic 3D model into a printable file including any support structures - it's largely an automated process) and tweaked the rotation of the model and size of the print bed, as well as the cure time for the first few layers to see if it'll adhere better.

The problem with failed prints with this style of printer is that you have no idea whether it's working for over an hour after starting the print, as the print bed doesn't rise high enough out of the tank for you to see what's happening. The Photon does have a pause function that stops the print and raises the bed high enough to see, but I did this a few times on the test print yesterday and there are obvious layer marks at the points I did it, so as it affects the print quality I'm not sure I want to use it.

It's worth waiting as this model occasionally goes on a Lightning Deal every few weeks on Amazon (if you don't use it already, get yourself a browser plugin called Keepa which gives you historic pricing data for Amazon), which is how I bought mine. It knocked about £60 off, bringing it down to £320. You do need to buy a bunch of extra bits and pieces (lots of paper towels, lots of nitrile gloves, lots of isopropyl alcohol), I think I've spent about £400 all together, and there are still a few things I think I need. The printer is actually one of the more complete setups on the market, as it comes with all of the tools you need to set it up and calibrate it (even a USB stick that you stick the model files on, initially containing the printer software and test file), and it has a very user-friendly touch screen interface.
Top

I get the feeling the scaling's a little off, but the model's nice.
Top

Thanks. I've got a few things tracked on CamelCamelCamel so I'll add this to the list!
Top 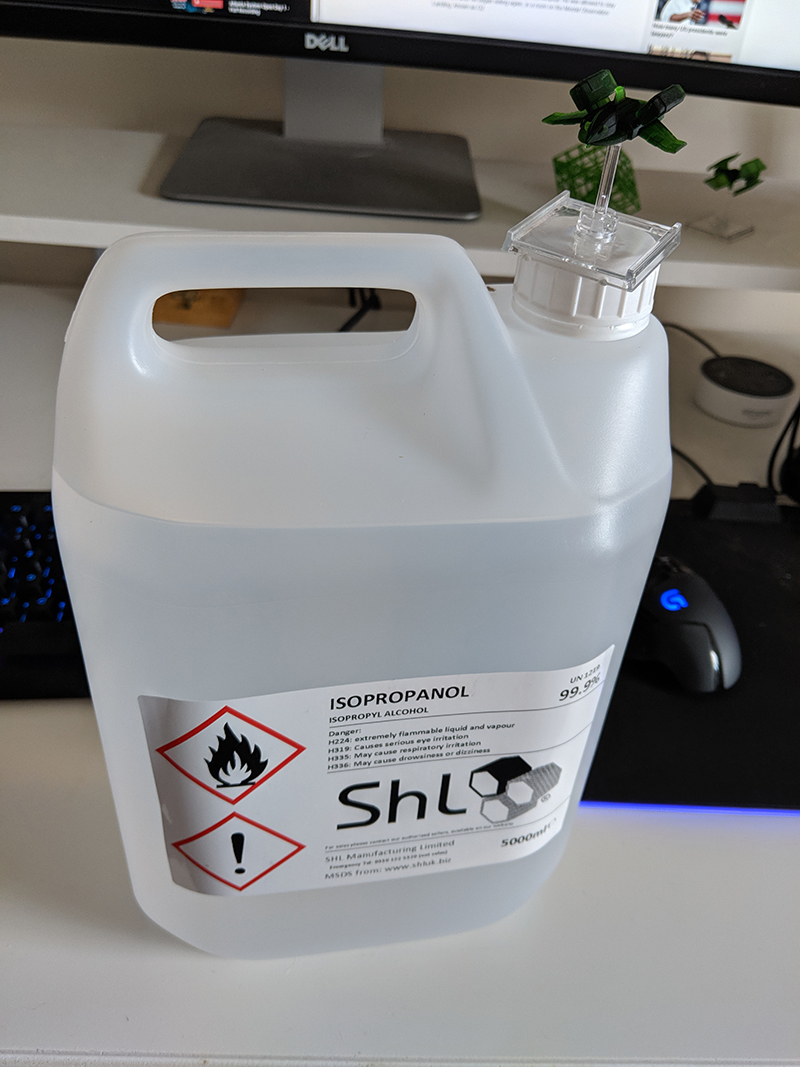 I honestly have no idea what this stuff is used for outside of cleaning up resin, but why do I get the feeling I'm on some sort of government watch list now?

I decided to reprint the Missile Boat at a slightly larger size. Wookiepedia says it should be slightly longer than the TIE Avenger, so I've scaled it up to match that. Because I need two of them, I just stuck two identical models (plus an extra TIE) in the same file. One of the quirks of this style of printer is that prints don't take any longer if you print multiple things at the same time, as the entire layer is cured at the same time. The print time is determined entirely by the number of layers, so taller models take longer to print. What you don't want to do, I'm told, is produce anything where there'll be a large surface area on any one layer. The printer needs to pull each layer off the bottom of the resin tank, and while the film that forms the bottom of the resin tank is a special non-stick plastic, the more surface area that needs to be pulled, the more likely the adhesion to the build plate will lose the tug of war and your print will fail.
Top

I don't have a lot to contribute to this thread as it's entirely outside my sphere of knowledge or experience, but I'm very impressed Raid

Sly Boots wrote: ↑
Wed Jun 26, 2019 10:12 am
I don't have a lot to contribute to this thread as it's entirely outside my sphere of knowledge or experience, but I'm very impressed Raid

In fairness, I've only really moved a handful of files around and pressed some buttons, the hard bit (the 3D model designing) has been done for me. I'm a couple of hours in to a Blender tutorials playlist I found on Youtube, so I'm beginning to pick up the skills I need to do that in future.
Top

Definitely on a watch-list

I hope it won't affect my security clearance 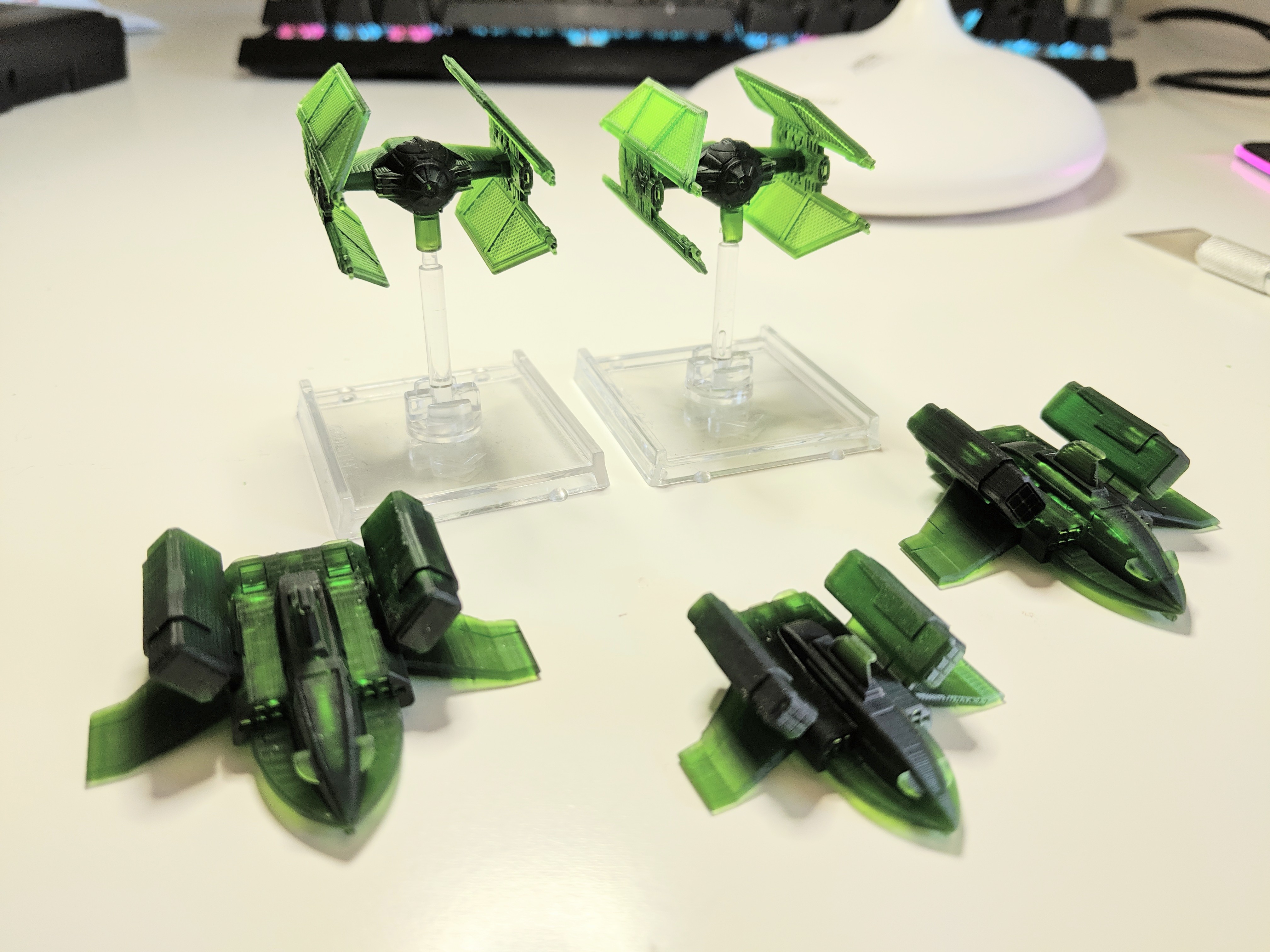 Learning point for today; make sure when using the slicing software that the model doesn't intersect with the print bed. The second TIE did this and has lost the rear 0.5mm or so of the wings. I must say these things are quite difficult to clean up; I'm used to using an xacto knife to clean up plastic parts from model kits, but this stuff is both more brittle and easier to mark. I think I'll need to get myself some really fine grit sandpaper to clean these up before painting.

I have something else printing that's both amazing and fabulously boring. Will post photos of it when done.
Top 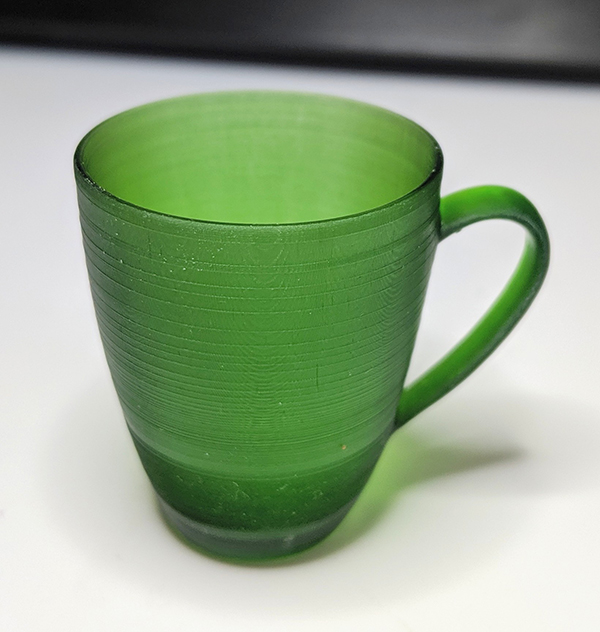 This is the first object I've ever really modeled from scratch. I've gone from having basically no 3D modeling experience (I'm not really counting the token holder, given that it was created by bashing cubes together with the software equivalent of two rocks), to creating a 3D model, to forging a puddle of goop into that object, all in the space of a few hours. I love living in the future.
Top
Post Reply
50 posts