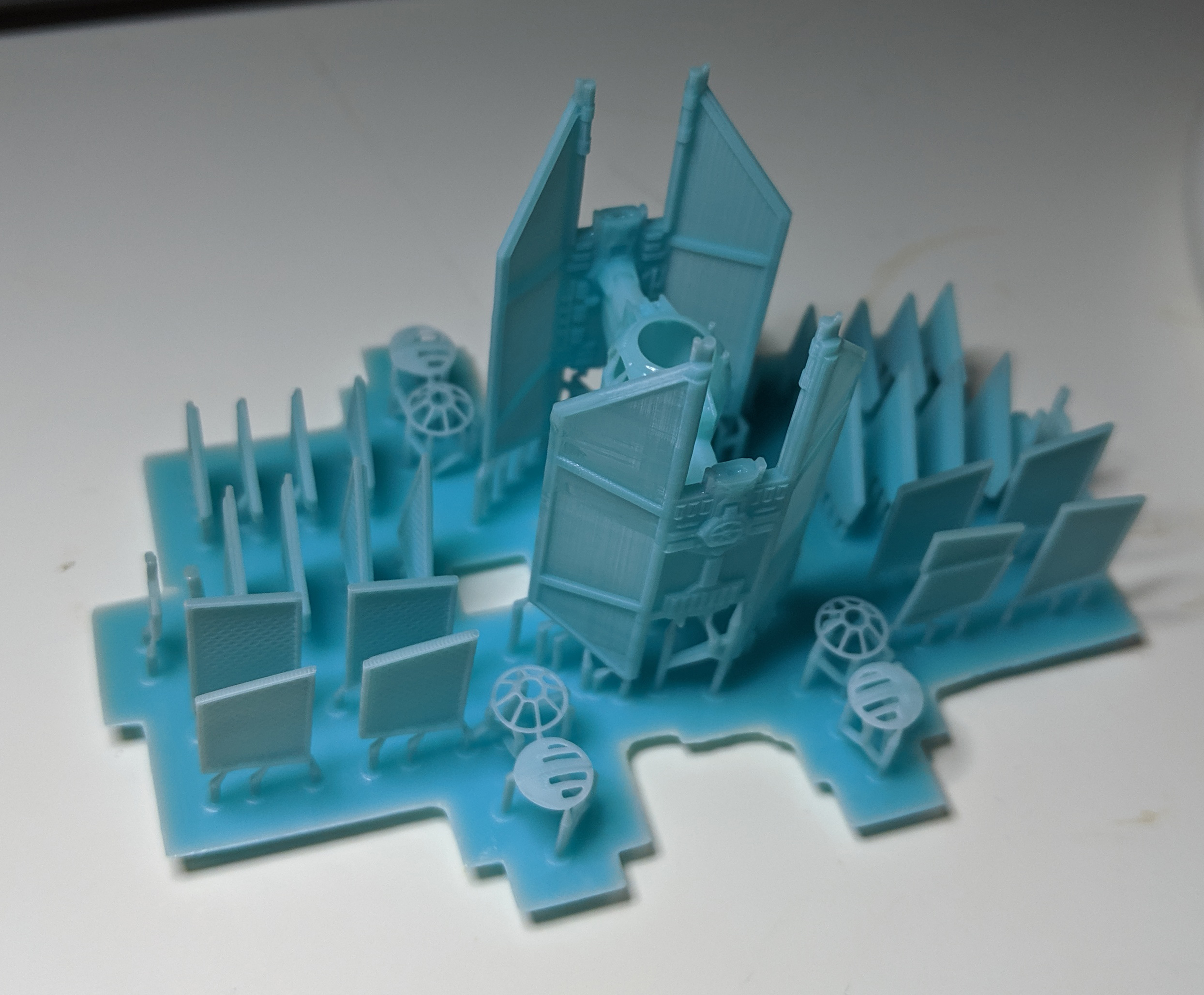 This must be about the tenth iteration of the TIE Avenger. I tried to paint the initial models that I printed a couple of weeks ago, and they turned out to be so unbelievably fiddly that even painstaking masking (each one took an hour to mask) didn't give me a satisfactory result. The problem was that the gaps between the solar panels are less than 1mm wide, and getting low-tack masking tape to stick well enough to prevent paint getting underneath was downright impossible. I've also had the notion of this being something I could potentially even produce low volumes of for other people, and so making these easier to produce in the future was something I thought spending a bit of time on now would be beneficial.

... what followed was six hours of painstakingly taking the model apart so that I could separate each of the 28 solar panels into individual pieces, allowing me to paint them without the tedious masking process. I've also removed the cockpit window and hatch, as they proved genuinely impossible to mask properly, and I thought the easiest way of doing them was to simply make the centre of the ship hollow, and just remove the 'window' parts leaving the octagonal frame. I may want to paint the inside of the ship black to achieve the level of contrast needed to make it look right. I printed each of these two pieces four times just because they're so tiny that I anticipate breaking a few and I wanted extras.
Top

I've needed a bit of a win after near constant frustration with the TIE model, which just isn't behaving. My brother's coming up this weekend, and I decided to print him the Shivan juggernaught Sathanas from Freespace 2 (he used to be a writer for a major Freespace 2 mod back in the day). I did the first half today, and I've got the massive mandible-like arms to do tomorrow. 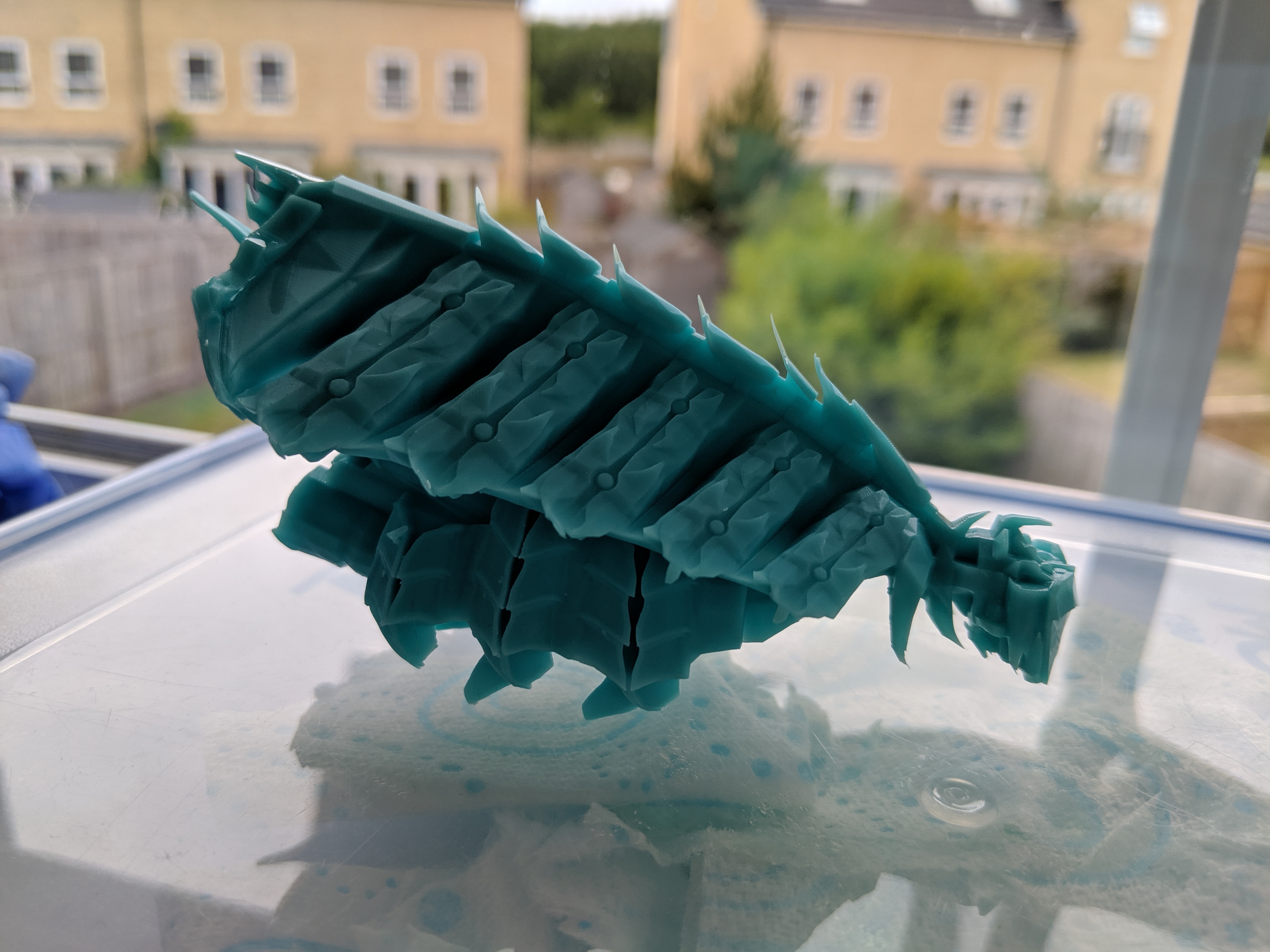 It's by far the longest print I've done at 8 hours, and while it's not a perfect print, I'm pretty happy with how it turned out. It's an extremely complicated shape, and the slicing software gave it hundreds of tiny supports, which thankfully just peeled off for the most part. I've found that removing the supports before curing the print in the UV 'oven' makes their removal so much easier, but it does mean you have to wear gloves while doing it as the resin is still potentially toxic at that stage.
Top

The wee man was away someplace with the wife today while I was at work and he got to fart about with one of those 3D pens... Granted it's nowhere near your level Raid, but I thought it was pretty cool and it is technically 3D printing, albeit in a more crude, freehand form.

There's something inherently cool about those things, but I don't really understand what they're for. Are they intended as toys?

I printed the Sathanas' arms today. I made a few attempts at them earlier in the week, but they just would not print lying flat (which drastically lowered the print time). Because they were now standing up, I had the space to stick a tiny, vaguely-to-scale GTD Bastion alongside them on the build plate with no extra print-time-cost. 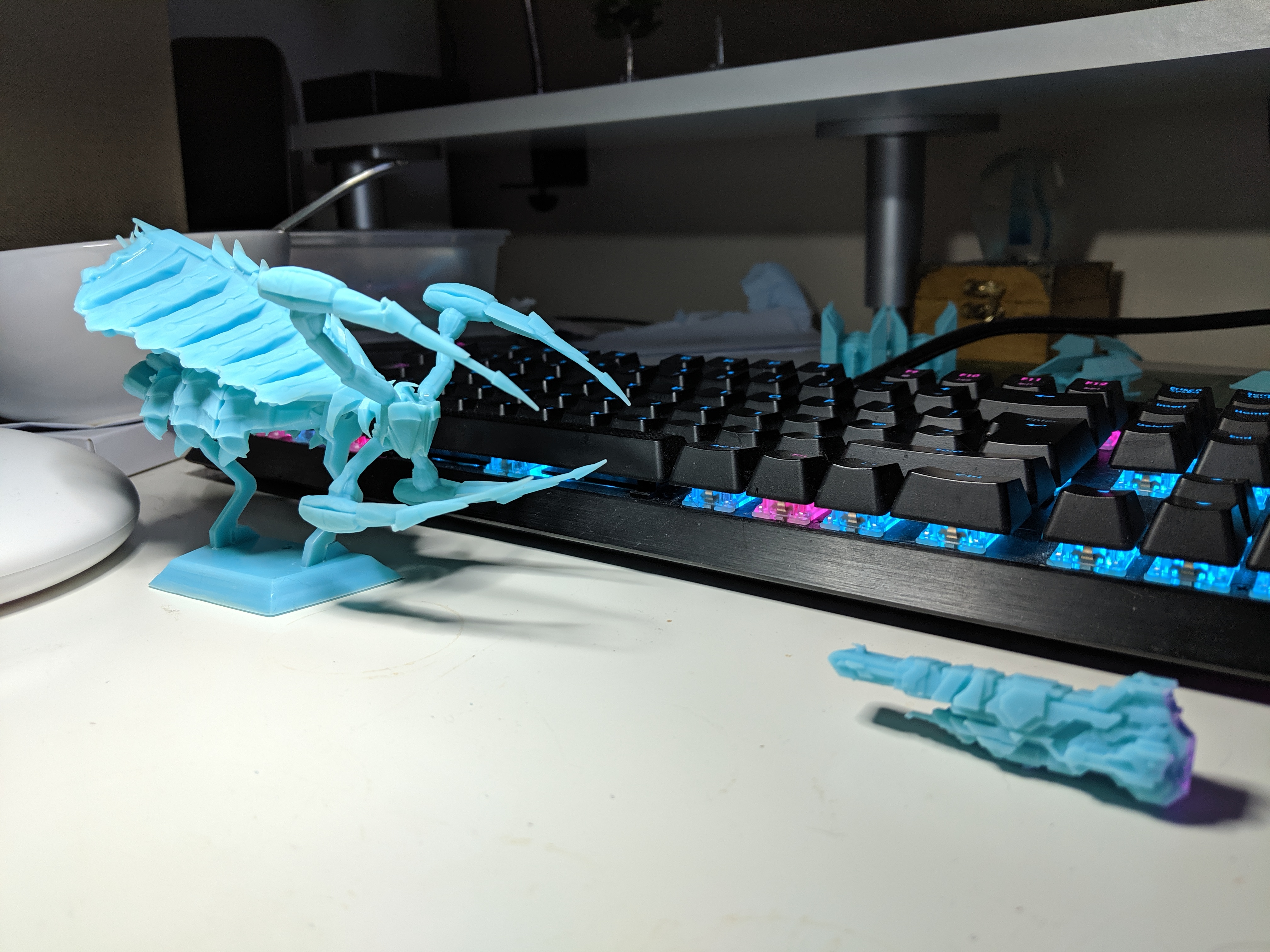 Always fancied a 3d printer for doing terrain/bits and bobs/etc.
Sadly it is outside of my available time, and I don't have time to learn 3d modelling either

I haven't printed anything particularly exciting in the last couple of weeks, but I've had chance to produce what will eventually be an illuminated button on a colleague's bartop arcade cabinet project that he's working on. I took his Youtube channel's logo and turned it into a 3D model, added a circular base underneath and printed it. Painting was actually the difficult part once I worked out how to turn a jpeg into a vector that I could import into Blender. I initially tried to use a liquid mask, pouring it into the gaps, but getting it back out again once it solidified and after painting turned out to be a nightmare with so many tiny corners it could stick to, and it took some of the paint with it. Eventually I printed a second one and just sprayed it without the mask; turns out the gaps are so thin that the airbrush doesn't reach into them.

So something a bit unexpected happened yesterday. I popped into a local gaming shop to see if they had any X-Wing Miniatures game stuff, and got talking to the owner. I mentioned that I'd printed a few X-Wing ships, and he mentioned that he runs D&D games as part of his job and he and his customers have a need for getting some custom minis printed, specifically some from heroforge.com, which is basically a custom-character generator in the style of PC RPGs, but for D&D characters. I downloaded one of the example files that heroforge offer (you need to pay $10 to download your custom character), and printed it last night. 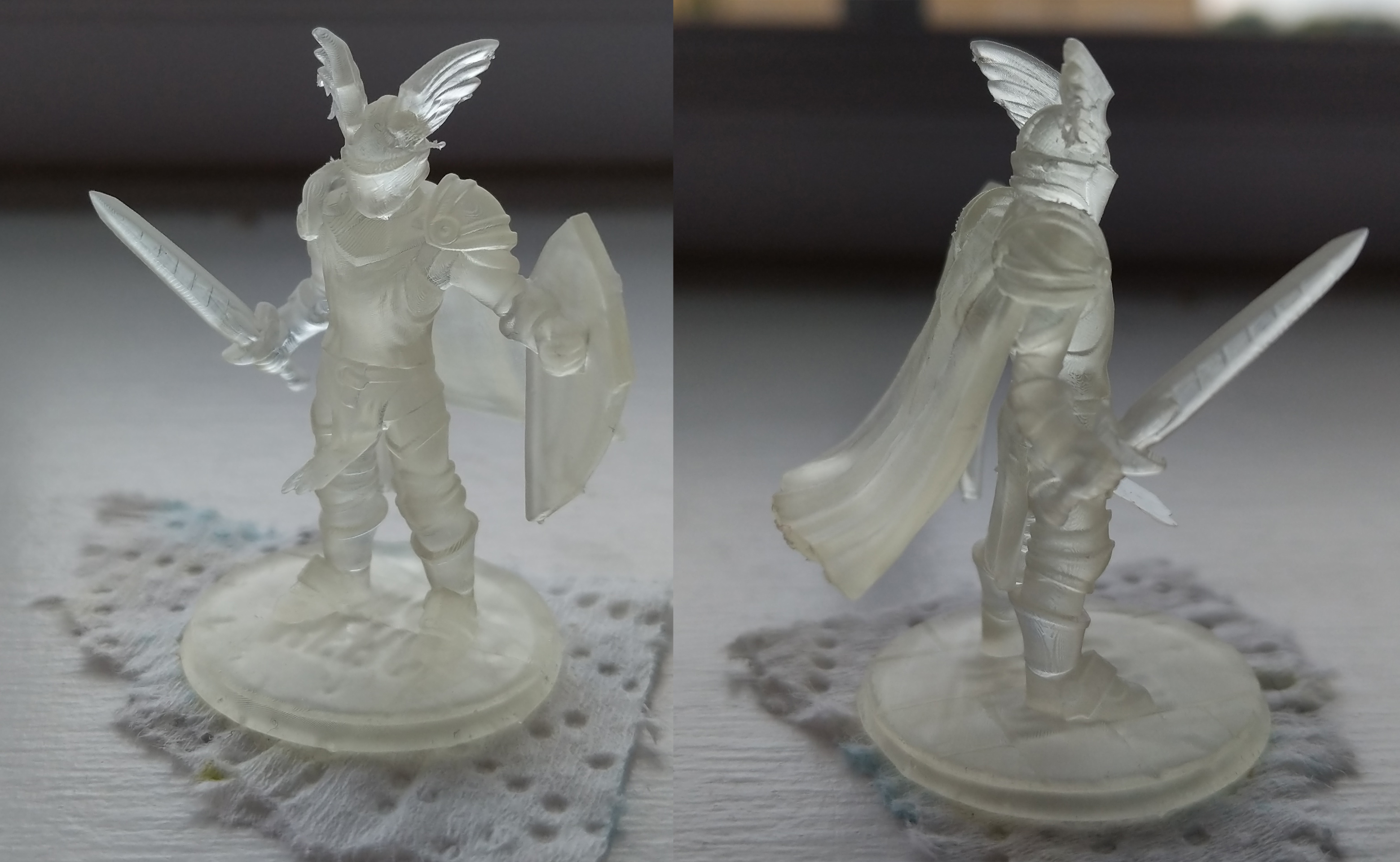 It didn't take much effort to get a decent-enough print (I'm honestly quite impressed with the site's output if these demo files are anything to go by; creating 3D files suitable for printing is a non-trivial exercise). I took it in to show the guy, and long story short, I may now have a small 3D printing business.
Top

Excellent!
Between tedium and fright
Such is the song of the nether world
The hissing of rats
And the jarring chants of angels
Top

Already finished my first order. Not from heroforge, but here's a lovely pair of Goblins. 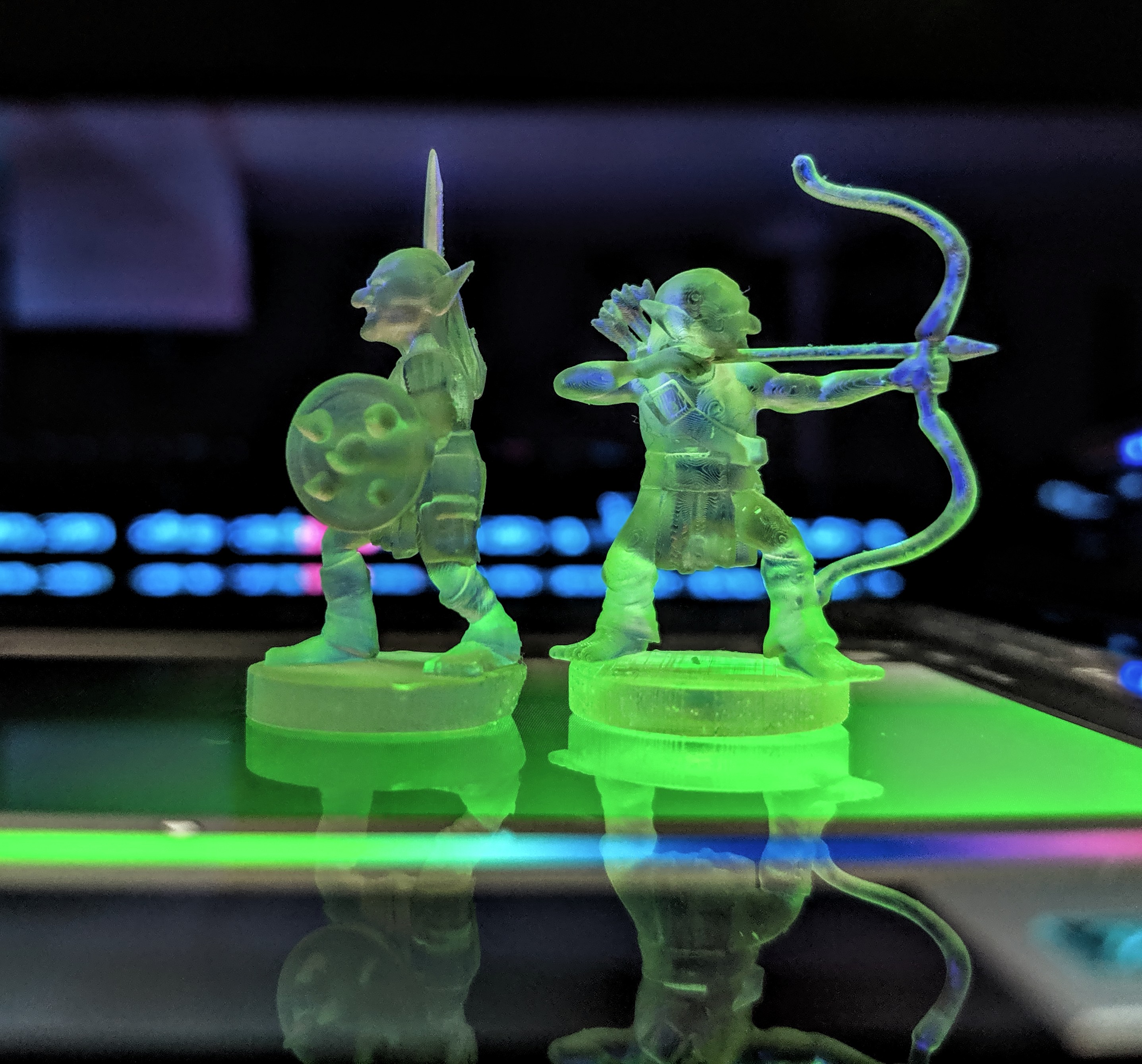 So I've gained a lot of experience in printing complicated objects over the last couple of weeks. I've sold a total of 10 miniatures since starting, some of which were larger than others. The nicest thing I've produced is this halfling riding a wolf, holding an owl and accompanied by her pet cat: 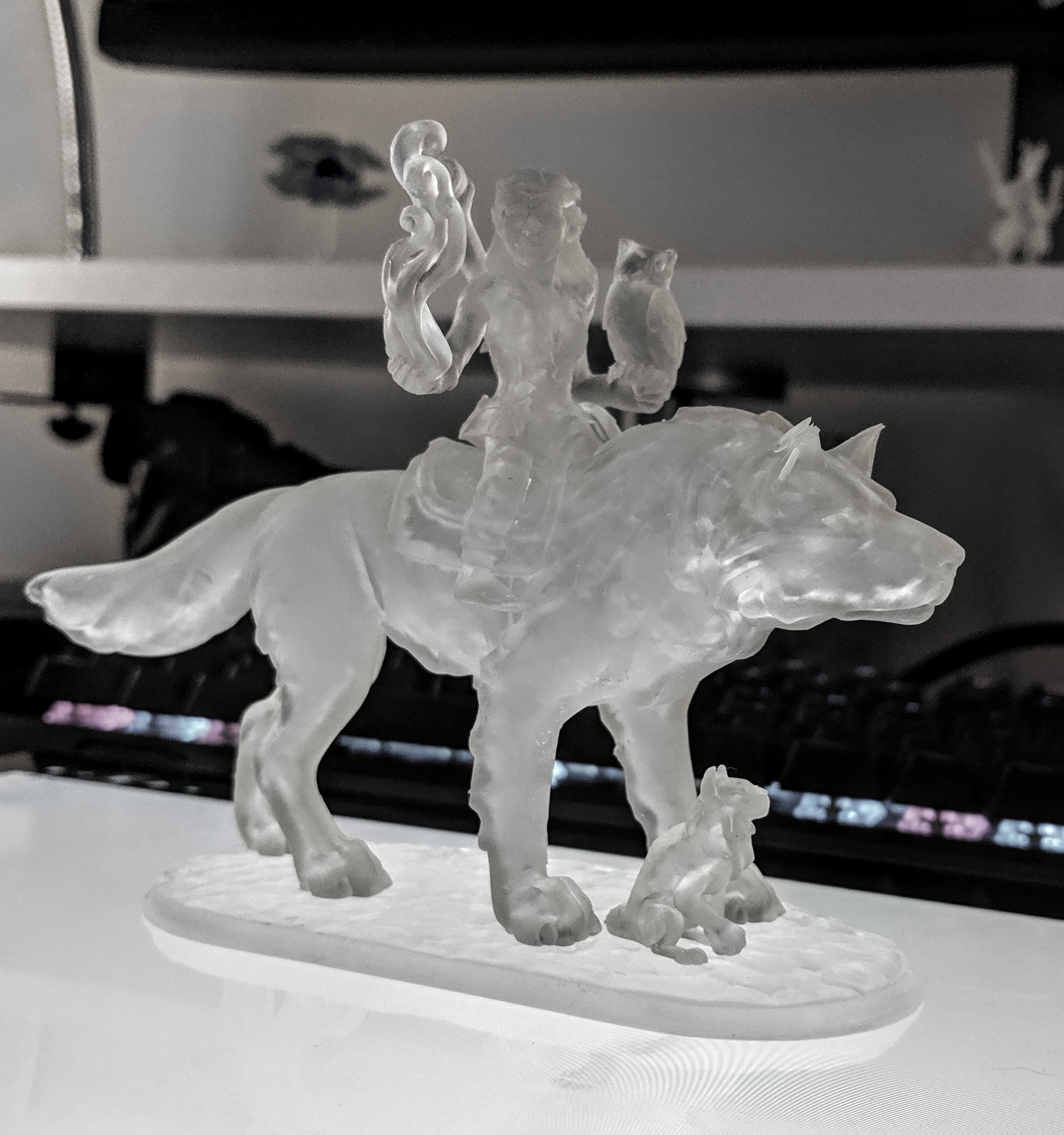 It's about 14cm long nose to tail, and took a whopping 9 hours to print. Orienting these things to print without errors has been the trickiest part, and I've learned a lot about placement of support structures.

But now onto something for myself. 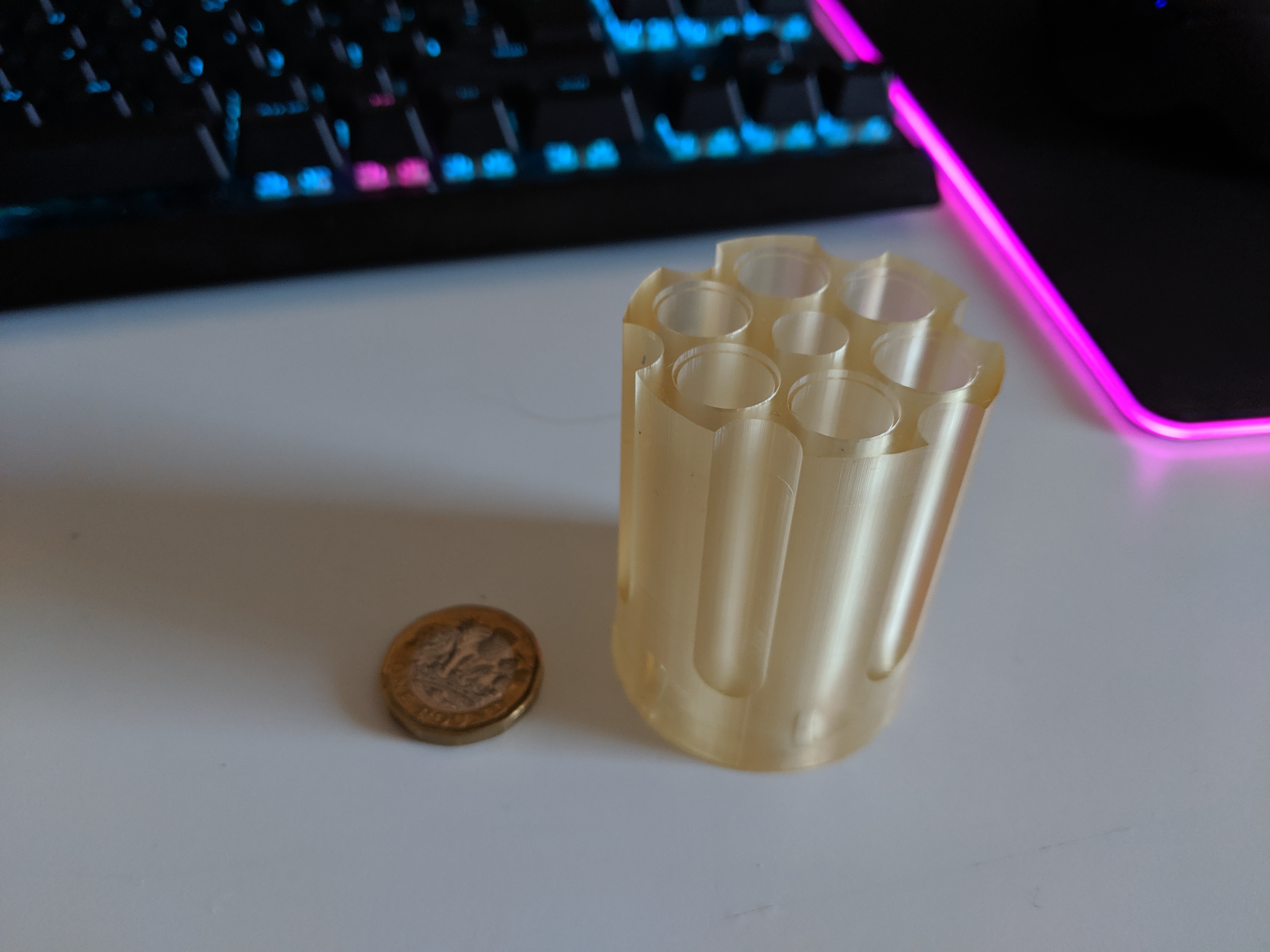 This is the first part of an object I've wanted to own a representation of since I was a teenager; Vash the Stampede's AGL Arms .45 Long Colt revolver, from the anime Trigun. I haven't modeled this myself, it's a file I grabbed from Thingiverse, and it's separated into sections for easier printing. It's quite big for a handgun, but I've already sliced the largest parts and my printer has a print area *just* large enough for the biggest part (the handle). The cylinder that I've printed took a little over 4 hours, but the larger parts are going to take up to 12 hours each, and they're too big to print more than one of them at a time. Because the printer can't be run without good ventilation and I don't want to leave windows open when there's nobody in the house, meaning I only get to do these longer prints on weekends, it's going to take a few weeks to print everything.
Top

So you're selling things as well? Does it bring in a decent amount, or is it more a hobby paying for itself?
Top

Yup, I've made (I think) a little over £100 so far, but I don't really have any idea how sustained that income will be. I'm not communicating directly with the people the models are for, I've been speaking solely to the gaming shop owner, and he's a an intermittent communicator. Even if I don't make a penny more, it's been worthwhile; I've used about half a litre of resin in producing that £100 of models, and it's enough money to buy three litres of the stuff.
Top

Loving it all so far

Do people paint the final models you print or do they keep the see through?
-- To be completed at some point --
Top

Raid wrote: ↑
Mon Aug 26, 2019 5:35 pm
Yup, I've made (I think) a little over £100 so far, but I don't really have any idea how sustained that income will be. I'm not communicating directly with the people the models are for, I've been speaking solely to the gaming shop owner, and he's a an intermittent communicator. Even if I don't make a penny more, it's been worthwhile; I've used about half a litre of resin in producing that £100 of models, and it's enough money to buy three litres of the stuff.

Ah, I didn't see the post above where you talk about it. Nice

I've only seen one of them done so far, but yes, the intention is that they're hand painted.
Top
Post Reply
50 posts