by Snowy
Can't say I am surprised, he just hasn't stood up in comparison to his team-mate.

I really rated Danny Ric as a driver, as the last of the late brakers he has made some spectacular moves over the years. It felt like he took a kicking from Max and became the RBR #2, moved to Renault and didn't achieve much, moved to McLaren that had just started a resurgence in performance and again achieved little.

From watching Drive to Survive (I know) it felt like he got into his own head and couldn't really get out again, but for me it was simply that he never really got comfortable in either team.

Big shame, I like him a lot. Of all the F1 paddock, if I had to choose one person as a mate it would be him every time, I think he is the most like me.

by Raid
I think that's part of the problem; he's too damned likeable. People want him to succeed, maybe to the point of overlooking his obvious driving deficit. He hasn't announced what he's doing next year yet, but I suspect he's probably done in F1. Even if a Williams or Alfa wanted him, he's always had high salary demands. I reckon he'll end up in a lower series for a few years (Indycar probably, he seems to be a big fan of the US), then he'll get a TV job.

by Snowy
Ended up looking up the result online half-way through the highlights before turning them off. Good results for Russell and Alonso, otherwise not much to write home about.

by Raid
I've just finished watching the Channel 4 coverage. The ending had me laughing out loud. Ferrari pitted LeClerc on 43/44 to get the fastest lap. They seemingly didn't notice that Alonso would overtake him on the way out of the pits (even I could see that 19 seconds wasn't enough of a gap). He did get back past Fernando, but it was on the start of lap 44, meaning he didn't have time to get the fastest lap. And then LeClerc got a 5 second penalty for speeding in the pit lane, putting him back behind Alonso. I'm beginning to wonder if there's some sort of Producers-style "we'll get more money by coming second in the championship" scam going on, it's pitiful.

I know we're not generally Verstappen fans on this forum, but he was in a league of his own today. He started 14th, but beat his 2nd-place-starting teammate by 18 seconds (after Perez had a pretty normal race, I'm not aware of there being any damage to his car). There was apparently a 30kph difference in the speed traps between Verstappen and Russell (and C4 pointed out that DRS is only worth 17kph).

Does anyone else think that overtaking's gotten a bit easy at Spa? It almost feels like a foregone conclusion that the car behind at La Source will be ahead come Les Combes, so long as there's not a huge gap to start with. Do they need to just get rid of the DRS zone along the Kemmel straight?

by Wrathbone
I was mildly amused by the shot of Hamilton’s sulk walk down some back road, where it looked like he might veer off to go live in the woods.

The state of overtaking was best demonstrated by Vettel, Ocon and Gasly swapping places multiple times in the space of 30 seconds. 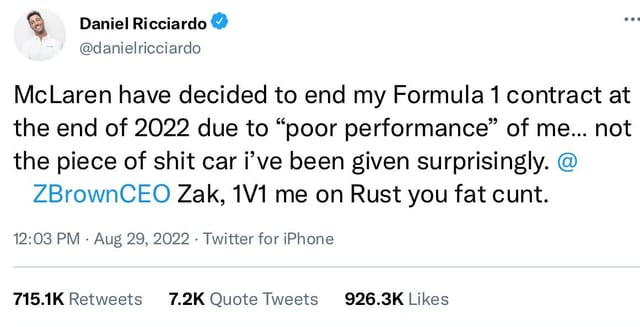 by Sly Boots
Looks like Ricciardo is heading back to Alpine for 2023, alongside Ocon. Any idea where Alonso is going?

by Wrathbone
I think he’s replacing Vettel at Aston Martin, much to Alpine’s dismay.

Can't find any reference to that.

Yesterday's race was another non-event I thought, Verstappen dancing into the distance while Ferrari make a total bollock of it all again, but this time with Mercedes for company. When are Ferrari going to have a purge ffs?!?

by Raid
I'm going to hazard a guess that Ricciardo didn't actually challenge Zak Brown to a Call of Duty match, and you don't insult the car when your teammate is kicking your arse in the same machinery.

I realised about ten laps into yesterday's replay that I've almost entirely checked out with this season and I was barely paying attention. We're not going to get a challenge at the front - the only driver with the car to regularly challenge Verstappen is hobbled by a strategy department that's given up and are now just asking the driver for which tyres he wants during the race. How many times have they told Leclerc that they're moving to plan C or D? I can understand having fall-back plans, but assuming plan A is their best chance at a win, how is it they're failing to run to it all the time? I know you can't read *too* much into radio communications, but given how often Ferrari have made a mess of strategy this year, it's difficult not to assume they're failing to live up to their own expectations.

The only bit of excitement I had from yesterday's race was Hamilton potentially challenging for a win and that was ruined by a safety car. Lewis was obviously frustrated with how things turned out, but given how well Max is performing at the moment, I don't think there was any chance of a Mercedes win. They probably should have given up on the victory and made sure both drivers ended up on the podium, rather than 2nd and 4th. There was the slimmest of chances that Lewis could have challenged on the restart, but there was no way in hell he was going to keep Max behind him on older, slower tyres.

by eny
Yeah, I too am dissociated with F1 at the moment whilst Max is so out in front.

Based on his performance so far this year, I had no problem with Russell running his own race and not staying behind Hamilton to help protect him. Russell deserves every chance, and I'm glad he got his strategy right for him. Lewis was never going to keep in front anyway...

by Drarok
Watched this over the weekend with the family, and my lad (nearly 4) said he liked the red ones. Oh no.

Read a report yesterday that Horner was very much against it as he felt he would be replaced if the link-up went through.
All times are UTC
Page 60 of 60
Powered by phpBB® Forum Software © phpBB Limited
https://www.phpbb.com/