And we're back! 4 days of roasting hot hell. Hours spent just pouring water over my head trying to crawl from one tiny shadow to another.

Having said that, I now have a new found love of the heavier stuff. The guys playing were brilliant. There were a couple that were too heavy for me but I loved the 'chugga chugga' stuff.

The festival itself was great. Proper metalheads are a nice bunch of people

There were all sorts of people there and everyone was treated with respect.

As we were packing up and moving our stuff back top the car I was recounting some good stuff we'd seen to Luke, my son.
1. Bin jousting (every night) and walking round the whole camp trying to find new bins and areas away from security until 2am.
2. Wrestling (once the bins had all been confiscated)
3. The amount of topless women: to which Luke immediately said 5. He'd kept count! Then on the way back was a topless goth wandering around the arena. He whispered '6'.

He wants to go back next year. I think we both agreed it would have been better with a bigger group of people. He hasn't asked his mother yet but I'd be more than happy for him to go alone with friends to Bloodstock as I really did feel like it was a safe environment despite the wilder sounding nature.

I'm glad I didn't let my anxiety get the better of me (I hate doing new stuff and worry about everything) and just bought the tickets as hopefully, this'll be a memory we can share for years to come.
-- To be completed at some point --
Top

Aw fuck yes, I am so glad you did it. Metalheads are the best people on the planet bar none.

Glad you enjoyed it dude. I haven't done Bloodstock for many years but it was a great vibe last time I went.

Off on my way to Arc Tangent down in Bristol for the weekend now to see a bunch of weird djent and post rock bands.
Top

Considered it as it isn't too far for me, but am seeing Opeth later this year and there wasn't too much else on the bill I wanted to see. Enslaved I love but have seen then oodles of times, Leprous also decent but again have seen them live.

Cult Of Luna are phenomenal live. Also, Frontierer will be worth checking out, it's like hardcore mixed with Meshuggah/Car Bomb vibes. My old band used to practice in the same space as them for a bit and I'll never forget the sound of it through the walls... They're not a band that I'd often sit through a whole album of, but I'm sure it'll be intense as fuck in a live setting.

Snowy wrote: ↑
Thu Aug 18, 2022 11:38 am
Considered it as it isn't too far for me, but am seeing Opeth later this year and there wasn't too much else on the bill I wanted to see. Enslaved I love but have seen then oodles of times, Leprous also decent but again have seen them live.

Is that the Hammersmith (I think?) show in November? I'm going to that, will have to say hello!

I'm en route home now so will write up a bit more later, but holy crap that was a good weekend.
Top

Yes indeed, am going with my othber half so we will be staying locally (we tend to do an overnight at a hotel whenever we go gigging together), be around for a pint beforehand I am sure!

For sure! I'll wing my number to you on Discord at some point.
Top

Cult Of Luna are phenomenal live. Also, Frontierer will be worth checking out, it's like hardcore mixed with Meshuggah/Car Bomb vibes. My old band used to practice in the same space as them for a bit and I'll never forget the sound of it through the walls... They're not a band that I'd often sit through a whole album of, but I'm sure it'll be intense as fuck in a live setting.

I didn't catch Frontierer up close but I enjoyed the hell out of it from one tent over whilst I ate chips.

They were very loud!

So yeah, what a lineup this festival had. Getting there was a nightmare on Thursday because of the train strikes so we missed half the bands and then my pre-booked taxi firm rang me at half 7 this morning to say all their drivers had "come down with Covid" so we were stranded on a farm in the middle of the Mendip Hills with no other cab firm taking my calls. Thankfully I managed to talk our way onto a fully booked coach for free when some people no showed for it so we made it back to Bristol only to have our train cancelled again.

Travel woes aside though, it was an amazing weekend. Download was a great time this year to discover a lot of new bands fleeting between stages but this was a case of having to rush between tents to catch all the bands none stop all weekend. Tesseract absolutely blew everyone away on Friday night, the light show was incredible and the band were completely on fire with the crowd giving it their all. I threw my back out moshing to them! Opeth were also excellent as always, my other half wanted to secure barrier spots for it so we unfortunately skipped Leprous (who I was really keen to see with their own crowd as I've only ever seen them as support), but the view we had right at the front for Opeth was well worth the sacrifice. Cult of Luna were great too but we hung back outside for that one on the Thursday because we were just exhausted from the stress of getting to the festival.

Other highlights were MONO (I have heard some heavy gigs in my time but nothing quite compared to the levels of bass. It was uncomfortably loud and a lot of people were holding their ears but I had my protection in so I was just enjoying the feeling of my entire body shaking as it was hit with the wall of sound), Alcest, Perturbator (who I have been desperate to see live for years), Zeal and Ardor, Sergant Thunderhoof (new discovery at the festival for me but really enjoyed it) and Hippotraktor.

New band out of Belgium. I stumbled on them just before the festival when I was idly browsing Youtube for some of the lineup that was unknown to me. Absolutely loved their album and have been listening a lot in the run up to the show. They did not disappoint. Even for a 12pm start at lunch time they drew a big crowd and absolutely smashed it. I can't recommend them highly enough for those who like proggy/djenty stuff, they're a bit of a eclectic mix of a few different styles.

I caught their singer near the merch tent after their set and had a short chat with him and they're hoping to do a proper UK tour next year as this was their first ever UK show so far.
Top

I'm really digging that, will go find the album, cheers!

My good lady got us tickets to Gojira next year as part of my birthday. She's a keeper.
Top

It's Prof Brian Cox talking about his black hole and planetary ring for me tonight! Can't wait 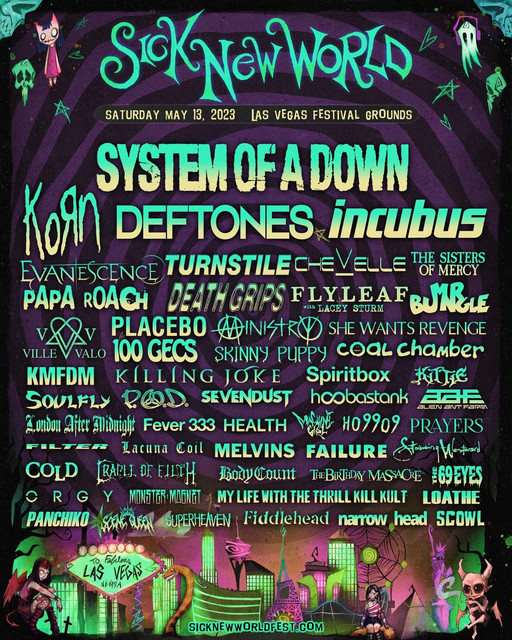 The 2000’s moshergoth that hibernates in the back of my brain just woke up.
I used to be eVoL but I got better.
I like everything now.
Top
Post Reply
111 posts