Not to mention the plot of Dark Forces has been completely erased by Disney. 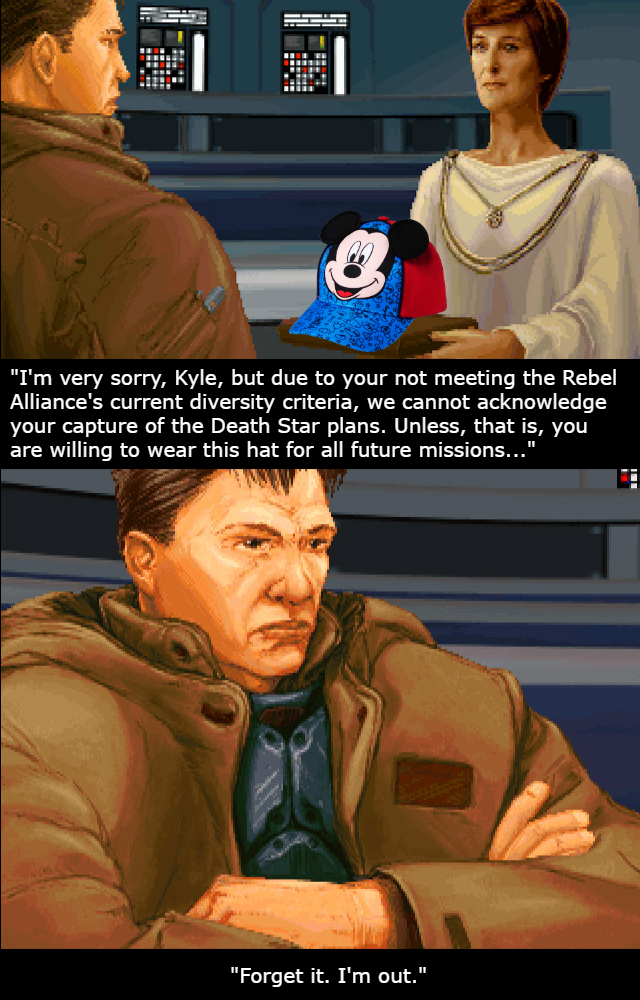 I always got the impression that Jyn Erso and the appearance of Cassian Andor were about as close to the names of Jan Ors and appearance of Kyle Katarn (in later depictions anyway) as they could get away with while remaining legally distinct. Sort of a long-term fan's script "easter egg" of sorts. Still, as a big fan of Rogue One, I didn't think too lowly of their retconning the story of the Death Star plans theft; don't forget that in Dark Forces it was just the first mission of the game anyway, a prologue of sorts, and it was never mentioned again. There's actually a lot of pre-Disney stuff that has made it into the new canon; a *lot* of ships remain, such as the Moldy Crow, TIE Defender and Assault Gunboat.
Top

While I liked Rogue One a lot (it was fantastic in many ways, with only a few questionable decisions), the fact that they removed Kyle Katarn was the biggest sore point for me.

You see, while I never actually owned a copy of Dark Forces during the 90s, I did have a DEMO of it, which I think came packaged with one of the LucasArts adventure games. I absolutely adored the demo and I played it over and over (and over and over) again. The demo was, naturally, the first level -- the prologue -- where Kyle steals the Death Star plans from an Imperial facility (with nowhere near as much security as in Rogue One, I admit). Although I do understand in the context of the game as a whole that this was only the intro, the actual plot significance of what Kyle did in that prologue in relation to the plot of the films, was monumentally important. In fact, I wasn't all that interested in the Dark Trooper story that followed (which was briefly hinted at in the demo) -- I was mostly concerned that Kyle Katarn was the unsung hero who took the plans to the Rebel Alliance before the events of Episode IV. This became an integral part of the story in my mind, so to have Disney wipe it out like it never happened really irritated me.

NOT that I want to sound like a whiny fan who cries when I don't get what I want... I just feel like a part of my childhood imagination was removed by Disney, and didn't allow me to enjoy Rogue One as much as I would have, had I never heard of Dark Forces.
Last edited by Stormbringer on Thu Mar 14, 2019 3:49 am, edited 1 time in total.
Between tedium and fright
Such is the song of the nether world
The hissing of rats
And the jarring chants of angels
Top

I can certainly understand that, similar things have happened with Star Trek in recent years that are difficult to get over. Personally though I can understand the desire to write the theft of the Death Star plans as more significant and exciting than a simple theft of an Imperial USB stick, and I think Rogue One tied into the franchise far better than Dark Forces ever did.

Still, I'm dimly aware that some of the Star Wars EU was a nightmare, and frankly not very good. Much as I think the sudden deletion of thirty years of books and games was a bit heavy handed, I can't be too surprised that Disney didn't want to pick and choose.
Top

I had assumed that Dark Forces was pretty much official canon, rather than EU, due to it being a LucasArts game. But oh well. Maybe Kyle did retrieve a copy of the plans, but the USB stick had the wrong file format or was corrupted? Or the plans were FAKE!
Between tedium and fright
Such is the song of the nether world
The hissing of rats
And the jarring chants of angels
Top

From what I remember, the post mission one cutscene says that Katarn and Ors return the plans to the Alliance, and "soon afterwards the Death Star is destroyed". The destruction of the Death Star may have been unrelated. Perhaps the plans Kyle obtained were just for the station's planning application from the local council and it was Erso and Andor that retrieved the actual blueprints.
Top

I'm cool with that theory.

Or, perhaps the "plans" Kyle stole were actually just the invoice from the contractors who built the thing, not the actual schematics. However, as the Alliance paid him to go on that mission, they had to cover it up to avoid a press scandal, so made it seem like he was involved in the Death Star's destruction by saying "soon afterwards the Death Star is destroyed" without mentioning that this was only thanks to the efforts of the Rogue One team (who conveniently all died) and nothing to do with Kyle Katarn, thus sparing everyone from embarrassment.
Between tedium and fright
Such is the song of the nether world
The hissing of rats
And the jarring chants of angels
Top

CD Project Red had an investor call today. Here are a few bits of information that came out.

-Gwent will finally receive a mobile version of the game, starting with iPhones - where it will launch in autumn 2019. Android support will come at a later date.
- CD Projekt has acquired new office building in Warsaw (next to their existing offices), which should allow company to hire another 250-300 developers.
- Witcher 3 is still selling well. Together with Thronebreaker, it has generated over $28.6 million (net) in 2018 (compared to $28.6 million net in 2017)
- GOG has only generated $7.8k net profit in 2018 on $34.5 million in sales. They burned them on R&D and operational costs.

They also said this years E3 will be their most important yet and to expect a surprise, Witcher 4 announcement perhaps?

Just on that GOG number, apparently the company absorbed a lot of R&D costs around a multiplayer platform to support their titles, hence the tiny profit.
Top

There's supposedly an as-yet-unnamed RPG in development alongside Cyberpunk 2077... it's probably that which they'll be unveiling, although I have my doubts if they'd been this silent over a new Witcher game.
Top

Whatever it is I'm buying it.
Top

Sly Boots wrote: ↑
Wed Mar 27, 2019 12:04 pm
There's supposedly an as-yet-unnamed RPG in development alongside Cyberpunk 2077... it's probably that which they'll be unveiling, although I have my doubts if they'd been this silent over a new Witcher game.

Probably don't want to distract from Cyberpunk, plus they have been burned before when announcing stuff really early.
Top

The 16-bit Aladdin and Lion King are coming to PC and consoles in October..

With all the usual modern jazz: upscaled graphics, filters, rewind and all that.

Sonic, Street Fighter and the 'golden age' of gaming magazines...

Nice little read with breakfast this morning. More trips down memory lane can be found here...

Made by the same people that made that terrible Rambo game a few years ago so fuck knows how this will turn out.

Discord just laid off a load of people as well...