I watched some Youtube coverage of the game last night, and decided that I'd take a chance on this one. It was partly due to the realisation that I've spent less than a hundred quid on games this year, and this will hopefully be a bit of much needed escapism.

I've played the opening section, which is a few hours long. It plays almost like an interactive movie, responding more to button prompts than making your own decisions. There's a slightly frustrating hunting tutorial, where you're followed by another character who feels the need to ask what you're doing if you're not doing exactly what you're supposed to. The voice acting is excellent, but the guy was basically nagging me when the tutorial is quite hands-off and there's a surprising amount to take in (there's a Witcher-sense style tracking mechanic where you need to lock on to a track for the game to acknowledge you're doing it right; it doesn't actually explain this).

That's not to say it's bad; it's very cinematic and phenomenally good looking, and I think it works as a prologue chapter. I stopped after getting to the first camp, where it's clearly opening up. The sound is excellent, and despite thinking it'll take me a while to get used to the shooting mechanics, the shooting feels solid and meaty (particularly thanks to the great sound design), with a single carbine shot to the torso generally being fatal to an enemy.
Top

I must say I'm tempted. Which version did you get mate? Was the patch massive?
Top

PS4. Didn't notice whether there was a patch (I was working upstairs while it was installing); if there was one it can't have been massive. It's the first time I've ever seen a game take up two Blu Rays though; haven't looked myself, but I read that it takes up 100gb of HDD space.
Top

I just installed on Xbox and the download was ~3.6GB
Top

This game has probably the best lighting engine in any game; it just looks so natural. 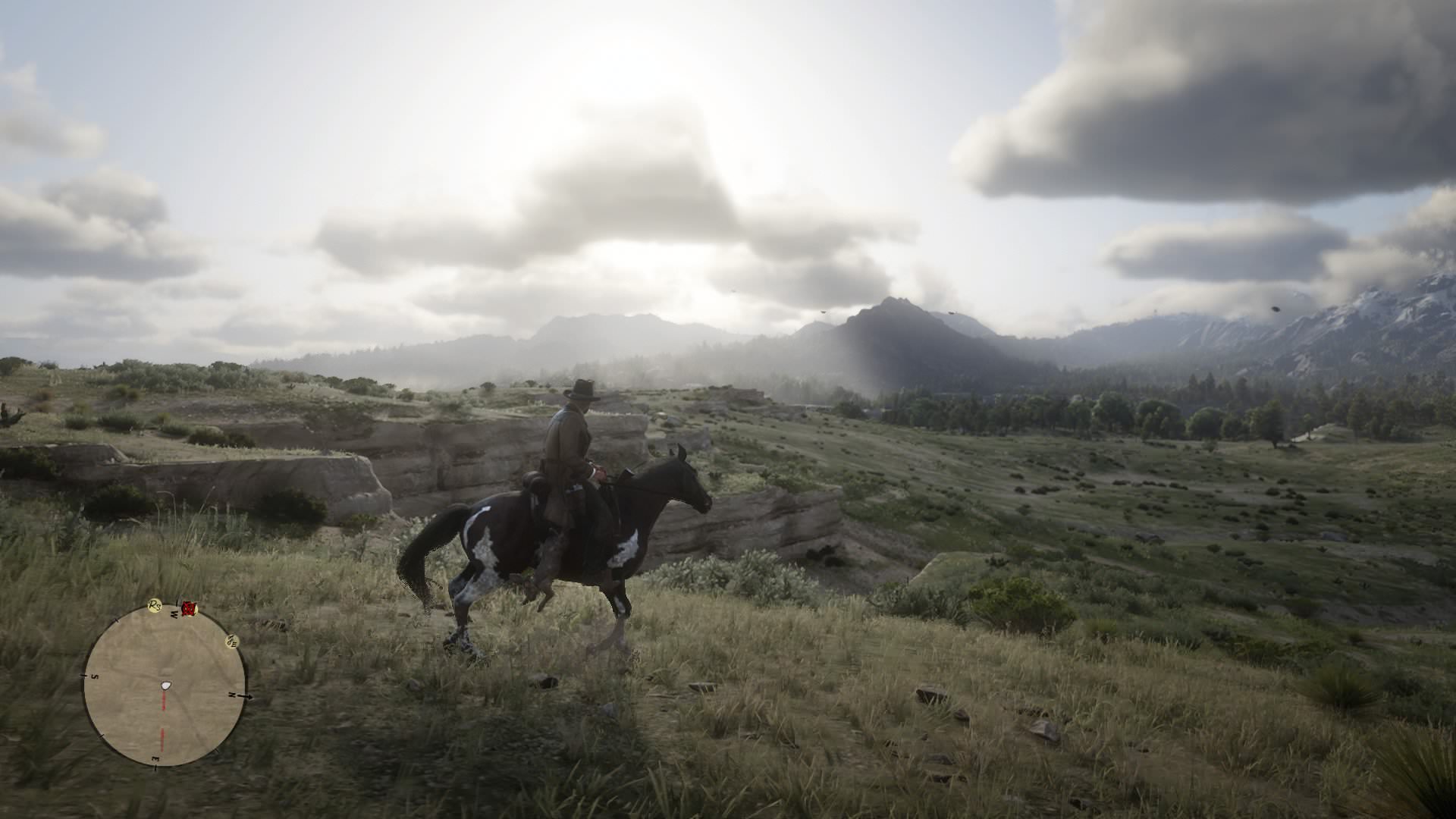 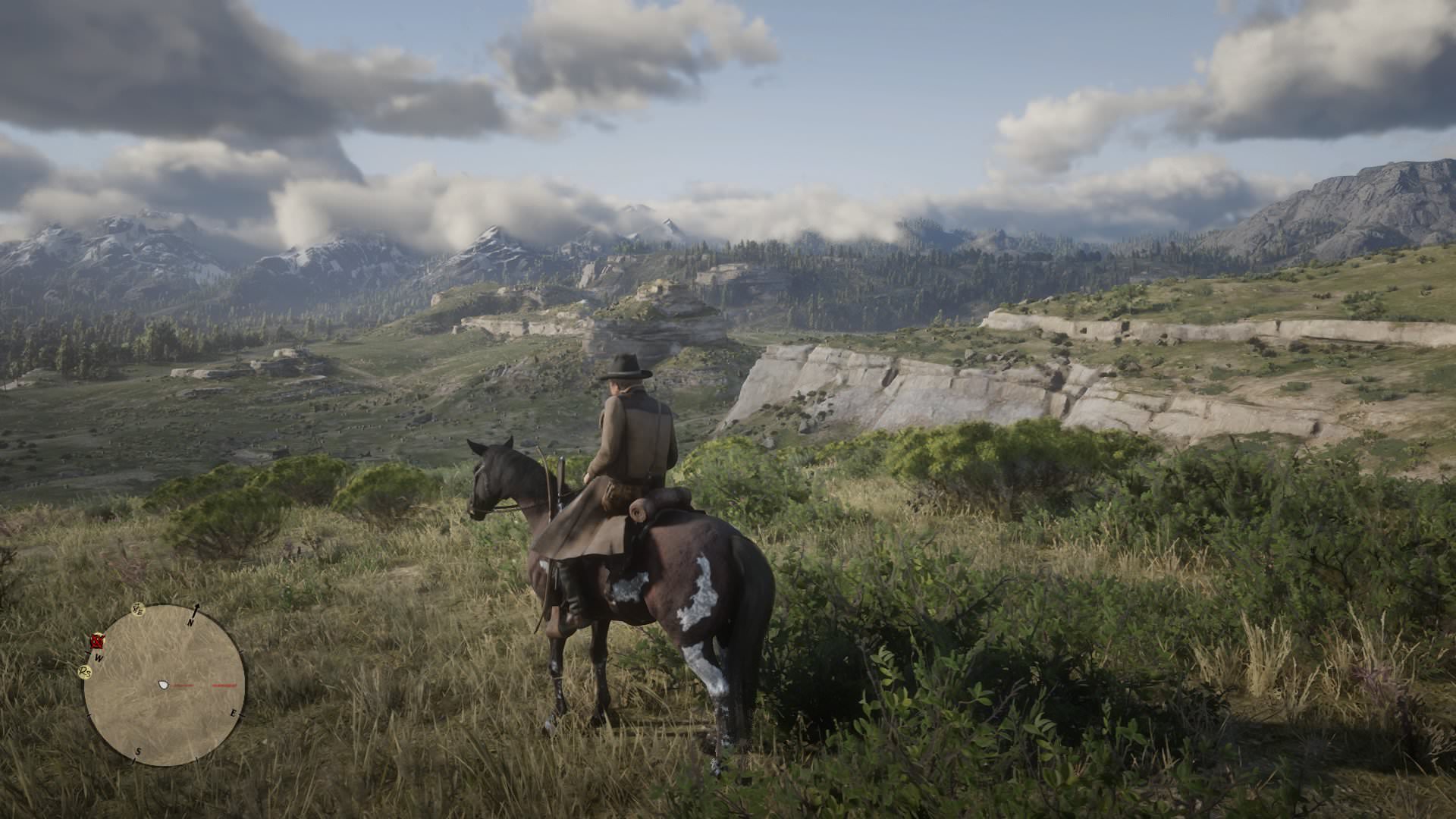 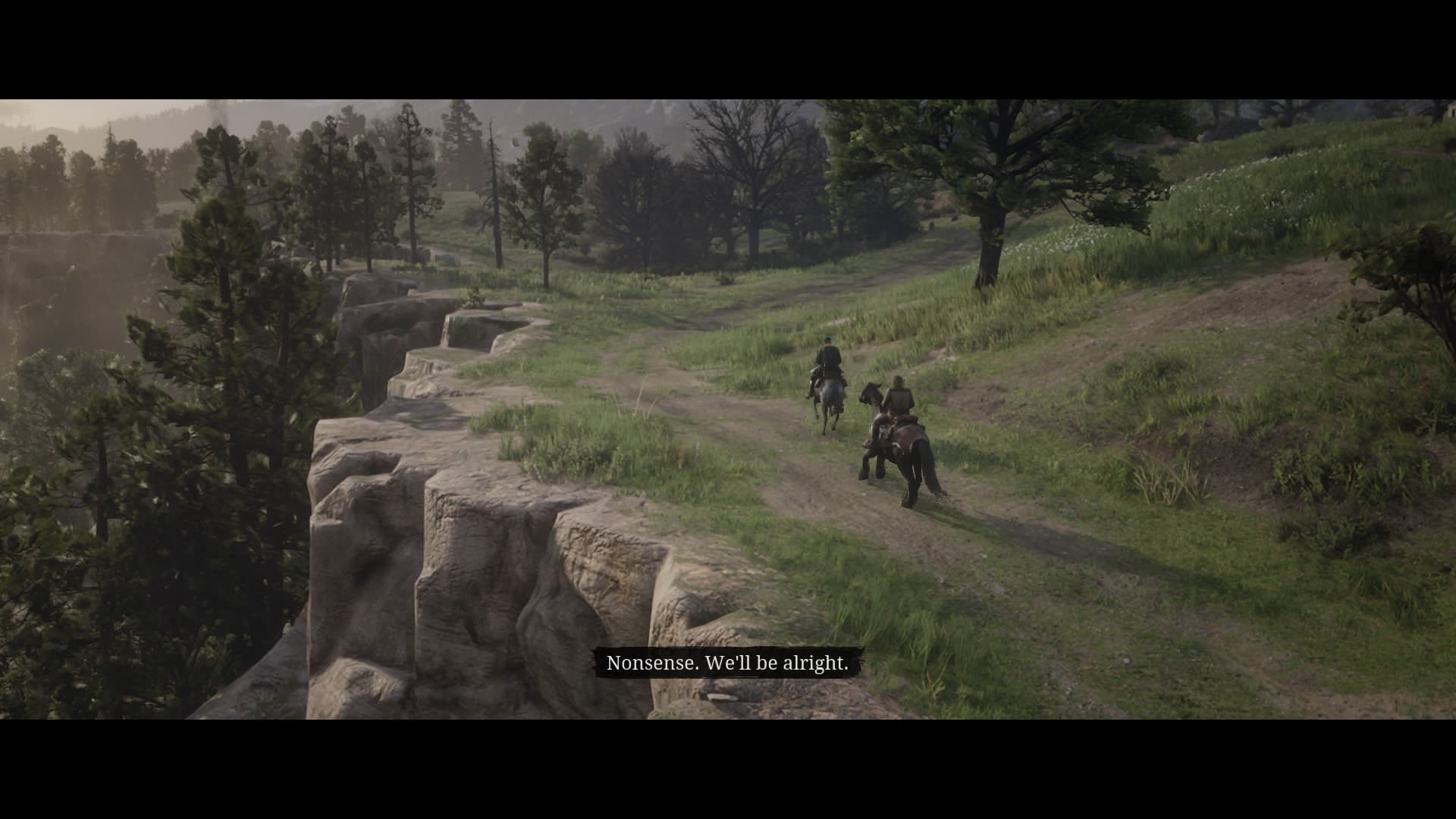 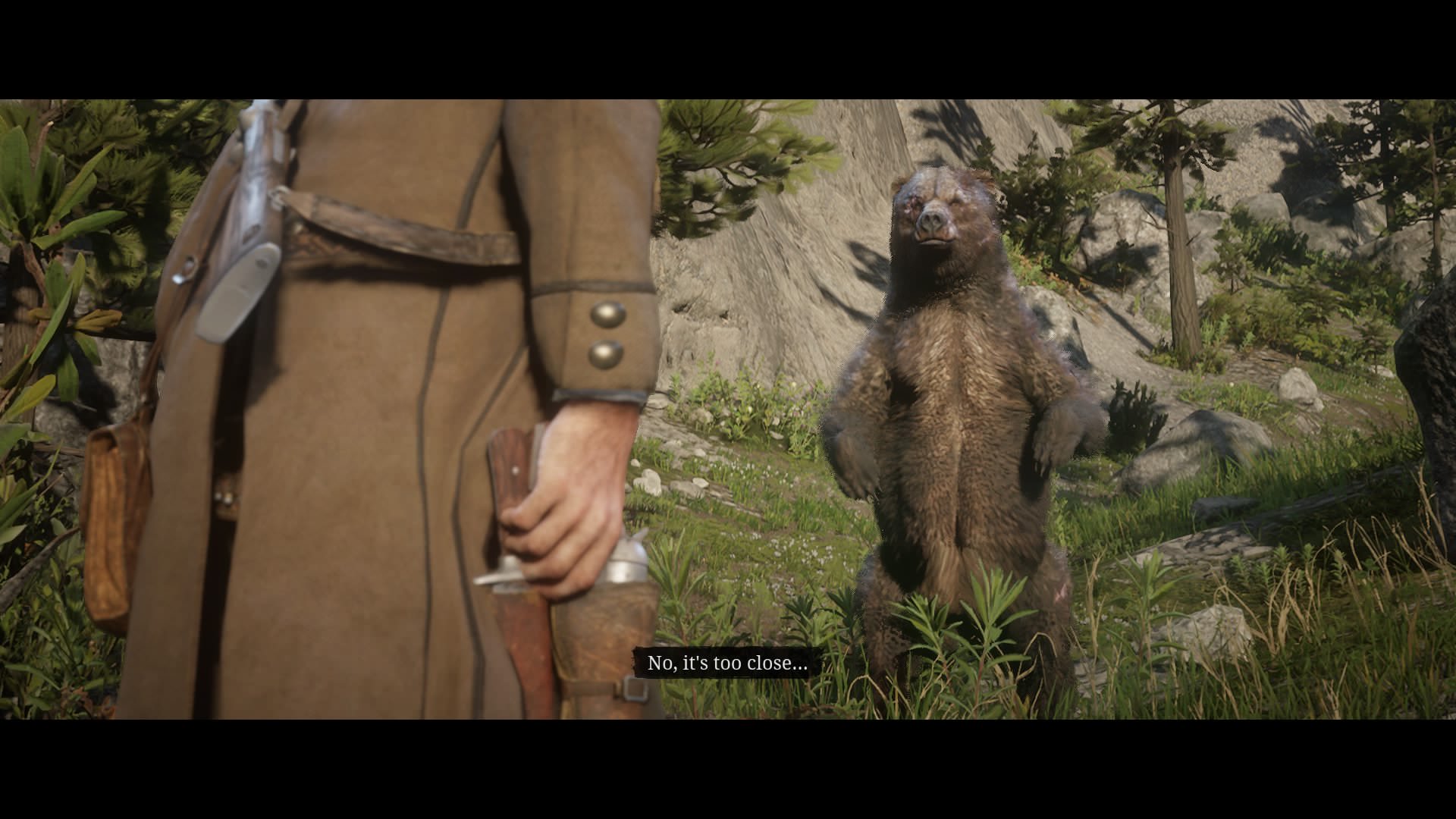 Had an irritating problem earlier. The mission these screenshots were taken on involved me hunting a legendary bear. After you kill the bear, you can skin the corpse to take the hide and meat. Hides are large items, and you need to carry them on your horse. You can only carry one large item, as far as I can tell. On the way back to town, I come across a woman whose horse has died and trapped her underneath. I free her, and offer to take her back to town. She tells me she can't get on, because I have the bear hide where she needs to ride. I don't want to lose "honour" (it's a stat, haven't really worked out what effect it has yet), so I stick the hide down, take her instead and ride towards town. After a short distance the game tells me I've abandoned my legendary animal. At this point my horse slips, falls on the both of us, and kills her. Brilliant. The game gives me a loot prompt for her body, so I figure I may as well make the best of a bad situation. I do this and am told I've lost honour. At this point someone else rides by, I'm told that someone has witnessed the murder (yes, murder), and then I'm hunted by... whatever passes for an officer of the law in this era.

So I lose my presumably expensive hide (it's not there when I return to the marker I left), I lose honour from pilfering the corpse of the woman I tried to help, and I get hunted for her murder despite her death being accidental.

This is a *much* more complicated game than I think I expected it to be. I was basically anticipating GTA on horseback, but I'm finding myself problems just because I can't remember the controls well enough. I've accidentally shot someone just trying to point a gun in their face as a threat (even if you don't have a gun equipped, your character pulls out his revolver and immediately fires if you press the wrong trigger), I've now killed a poor woman because I wasn't expecting the horse-riding and physics engine to be as complex as it is, and I've barely even touched the inventory system - using some items requires you to hold two buttons and press a third, and in general it just isn't very intuitive. I had Dutch berating me for not being able to equip my bandanna early on.
Top

I read the Kotaku review (nicely written) and he did say similar things. It was the most involving world but the most tiresome ui.
-- To be completed at some point --
Top

This is only the second of Rockstar's game series I've tried, but I think it's very clear that they're a studio promoting experiences rather than gameplay. This is I think by far the best looking game I own, the voice acting is probably the best I've heard (at least for a game with such scope), and quality just oozes out of every animation and model... but it's an average gameplay experience so far. The controls are really clumsy, and even ten hours in I'm still relying on the button prompts because most actions are infrequent enough for me not to be able to learn them. The UI is quite poor, the icons that represent your health, stamina and.... something else, are so tiny that I can't actually see what they're telling me. There's no dedicated map button that I've found (if there's an actual controller map, I haven't found it), you have to access it from the options menu.

I hasten to add that despite my negative comments I am really enjoying it. It's a beautiful piece of escapism, I just hope that's enough to sustain a 50+ hour game.
Top

That scenario doesn't really sound like a case of the game being complex and more just a combination of mechanics not really interacting well with one another.
Top

A mate of mine got into the first game after I got it him for a birthday after I'd been late into getting a 360.

He texted me earlier to say he was riding around in RDR2 on a horse and the horse ran into a tree and fell over and it was the funniest thing he's ever encountered in a game.

My mate bought it so I have it. First impressions are that it’s probably the best looking realism game ever and probably the most cumbersome controls I’ve fought in a long long time. I can’t say I’ve had any fun but I have been impressed.
I used to be eVoL but I got better.
I like everything now.
Top

I guess not much of the many years of development went into the AI.
Top

I've seen countless people saying how awkward the controls are - are they any worse than the first game?

Given that there are one or two places where the path from the first camp to the first town crosses a railway line, I did wonder how the AI would react to trains. I'm hoping that was just a bug, because standard traffic does stop and wait, at least at Valentine station, which is the only place I've noticed it.

I had a torrid time earlier. I'd been tasked to collect on some debts, two of which were some distance from the camp. I find it difficult to ignore wild game like deer if I see them while I'm travelling, so I'd killed one and had a carcass across the back of my horse while I called in on the debtors. As part of the second there was a brawl, and a witness got the wrong idea and ran for the sheriff. I chased him, accidentally shot him, and decided to reload the game as it had recently quicksaved. Upon loading, the mission marker was gone. There was no indication I could find as to whether the mission was complete or not, but as there was a hand-in point at the camp, I decided to ride back and try my luck. On the way I was ambushed by four bandits on horseback and killed. Upon re-loading, the deer carcass had vanished, and I'd lost about $8. I still couldn't tell whether the mission was active or not. Turns out it was and I was able to hand in the debts, but there was no indication that I could find in either my journal or on the map (the hand-in point had previously been a yellow mark).

The game does an awful job of explaining some mechanics to the player. When you die and the game reloads, it doesn't actually tell you that it's continuing after the point where you'd been killed. You'd think since it fills the screen with a simple "DEAD", that upon reloading it would take you back to a prior save, but it doesn't. Arthur is apparently immortal, and just sleeps off being killed - it's clearly the same as in GTA, except that in GTA you're walking out of a hospital having been revived, whereas Arthur just wakes up somewhere. It's entirely counter-intuitive, and there was no explanation as to why the deer carcass disappeared. I don't know if that was a bug or intended to signify you being robbed.
Top

Saw that earlier. Mack pretty much loves it aside from the controls and less enthusing gameplay on the combat side.
19-10-2003
12072