It’s kind of cool that the eject button changes virtual discs but I don’t think this is for me. Quite neat though.
I used to be eVoL but I got better.
I like everything now.
Top

I wasn't a PS1 fan so it holds no real appeal to me. I do hope they get as much crap as Nintendo did for making it short on supply as that's such a dumb move.
Top

Where did they say they were making it on short supply? I don't think they've even confirmed a list of all 20 games yet.

I'd be tempted by this as PS1 was my first real deep dive into gaming as a kid, but I still have my PsOne with the mini screen and all my game discs. Backwards compatibility on PS4 for the discs would be more appreciated.
Top

Brings back memories of late 1995 when I bought the first Playstation. It replaced my Amiga 600 (sniff) and served me well for a couple of years before I discovered the world of PC gaming.

My first and last console. Most notable thing about it was introducing me to Doom.
Top 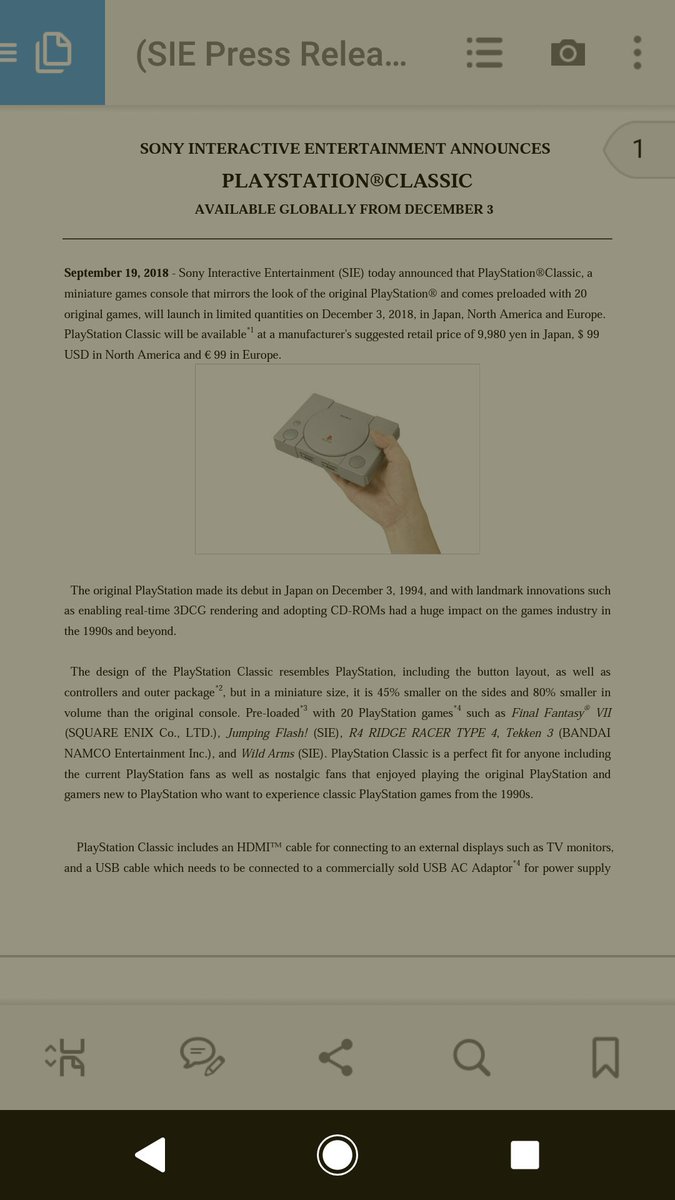 It's in the first paragraph Mantis.
Top

I don't really see the point of this. Nintendo's offering was popular because, let's face it, Nintendo are bloody awful when it comes to re-releasing their back catalogue. Sony on the other hand are really quite good at it; the PS3 ran PS1 games natively with the CD and digitally, and I imagine most of the popular titles are available digitally for the PS4. Not only that, but Sony have kept basically the same controller design for 20 years, so I don't see why you'd want to tether yourself with a cable when the standard wireless controllers have the same layout.
Top

The only way you can play PSOne games on PS4 is via Playstation Now, so I can see a case for people wanting this. The big thing against it for me is that early 3D era games often look terrible, and didn't play that well as people were still figuring this stuff out.
Top

Is it? I thought they were downloadable. Maybe I'm just remembering the PS3.

In which case I retract my statement. Well, retract it and replace it with "Sony are being stingy bastards who won't release their back catalogue properly, just like Nintendo. Arseholes, the lot of 'em."
Top

Yeah the PSOne classics were for PS3.
Top

Since Sony appear to be no closer to revealing what the 20 games on this thing are actually going to be. What do we think should be on there? Surely we can easily come up with 20 classic PlayStation titles? Whether they are likely to be included or not is another matter I suppose, but it'll be fun coming up with a list nonetheless. Fun I tells you!

So what are the 20 PlayStation defining titles that simply have to be on this thing?
Top

I'd love for some of the more cult titles to be up there though. It's a pain now if I want to play older stuff like Speed Freaks, Micro Maniacs, Hogs of War, Courier Crisis and Devil Dice. Vagrant Story would be excellent too.
Top

Seemingly the method for choosing these is to pick the x most popular titles for that console, where x is also the number of titles the mini console ships with. Then, just remove 40% of them and throw in some rubbish instead and don't explain the decision.
Top

Worth noting certain games like Gran Turismo will be out of the question due to licensing. I imagine the current crop that have been named are all original content.
Top

Hope you like nostalgia when £4.50 can buy you a pretty decent game on a Steam sale. I find a lot of retro games have a strong degree of rose tinted glasses. I am an Atari 2600 and Speccy 48K guy and loved playing them as a kid but playing some of them today the game mechanics and pure frustration in the controls compared to today's games makes them enjoyable only if you want a trip to nostalgia land. I cannot see the appeal of these machines to kids today who have zero association to these games except for "my dad loves them"
Games playing : Observation / A Plague Tale: Innocence / Total War Kingdoms / The Last Of Us
Top

I don't think they're aimed at kids. They're a nostalgia trip pure and simple; people who grew up playing these consoles are going to be the ones rushing out to pre-order them. And £4.50 a game is a pretty skewed way of looking at the value when you consider that doesn't account for the cost of the console itself or the controllers; plus if you want to play these games on PSN (which you can't on PS4 anyway because the PS1 classics aren't compatible for some silly reason) then you're typically looking at between £3 and £6 for them individually.

I like the concept behind these little packages. What I'm not so keen on is that Sony have made them available for pre-order but are keeping their cards close to their chest regarding what the other games are going to be. I'm not blindly pre-ordering something like that. The Classic needs to have at least 10+ titles on that I'd actually want to play for me to consider buying it.

Wouldn't it be great if they implemented PSN capabilities with it and made the entire PS1 catalogue available to buy and download alongside the 20 games included on the console? A dedicated PS1 machine would be a real trip. Won't happen though.
Top
Post Reply
43 posts