Netflix's auto-trailer shite is infuriating. I have to mute the TV while I'm browsing now because I can't hear myself think with it blaring out crap about stuff I'm never going to watch (or worse, spoiling stuff I do want to watch).
Top

It's fine on my 4k monitor on the pc as there's a button to mute the trailers...but yeah, on a TV. Sod off!
-- To be completed at some point --
Top

Glad it's not just me that hates that.
Top

Spiderman FFH
That was shit. Worst marvel film in ages. Bored senseless.
I used to be eVoL but I got better.
I like everything now.
Top

I've not bothered to go see it yet, which is strange considering how much of a self-confessed MCU fanboy I am and how much I enjoyed Homecoming. It's too soon after Captain Marvel and Endgame.
Top

I hope you get something out of it but for me its almost like they took the plot of Homecoming, reran it with a really dumb bad guy. Oh and they make Peter an absolute idiot.

This is very similar in style to King Arthur: The Legend of the Sword, which I watched a couple of weeks ago. That is, it takes a classic piece of British folklore and dials it up to 11 into an epic, over-the-top action adventure. It doesn't pretend to be historically accurate (it isn't in any way), but delivers on high-octane fun. Despite widely negative reviews, I really enjoyed it.

I also tried to watch Robin Hood: The Rebellion (unrelated to the Jamie Foxx film) on Netflix, but it was so awful I gave up after less than ten minutes.
Between tedium and fright
Such is the song of the nether world
The hissing of rats
And the jarring chants of angels
Top

The Lion King 2019
Visually very impressive. The landscape for the most part is photorealistic to the point for a lot of it I was trying to see if I could spot seams between background and characters because I thought they might be using real locations. Maybe thats a bit damning that I was lost in the tech more than being lost in the movie. Its fine but very unnecessary and inferior to the original which I've never actually been a big fan of in the first place so maybe if you are you'll get more out of this. Its certainly better than the recent spate of shit remakes from Disney (Dumbo and Aladdin) but its uninspired. The best thing around the Lion King is that cracking musical with the amazing puppets, thats really worth seeing!


I also must confess that I had it in my head that James Earl Jones was dead and they must have (Musthava!) used samples of his voice from the original to make this. Apparently he's very much alive and that makes me happy because the world needs that voice.
I used to be eVoL but I got better.
I like everything now.
Top

I've always loved anything to do with UFOs and aliens, even when the vast majority of 'evidence' is clearly nonsense. Like Mulder, I want to believe. But as someone who favours rationality and science, I'm yet to be convinced that we've been visited by aliens.

Sadly, Unacknowledged was not the documentary to change that view. If you enjoy hilarious, ludicrous tinfoil hat conspiracies, this is 100% for you. Its spurious claims include JFK, Robert Kennedy and Marilyn Monroe being assassinated because they wanted to go public about the alien cover-up, Carl Sagan and other high-profile scientists being coerced into denying that aliens are visiting Earth and also that we already have the technology to create perpetual motion machines that extract energy from space itself, but it's being held back by the super-rich so they can retain their power. All of this is backed up with frequent out-of-context quotes from major political and military figures, not to mention compellingly ominous music.

At one point there's an American pilot who was apparently asked to chase a UFO over Stonehenge, "in the Oxford area".

He tells how afterwards he was invited to meet Prince Charles, who was interested in the event, and that was what convinced him aliens were real. Some top reasoning there.

In terms of actual evidence and convincing arguments, it's 1/10.

As someone with woeful geographical knowledge, this image cleared things up for me: 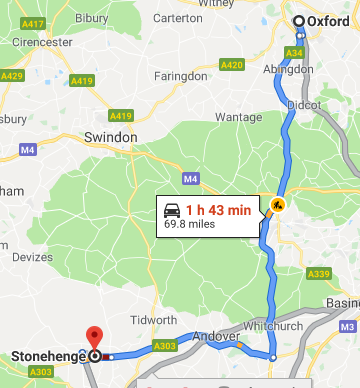 Just went to see Once Upon a Time... in Hollywood with the boy and the missus. Well I should say try to see as we didnt get in. The young gentleman taking the tickets that I had bought weeks ago deemed my son didn't look 18 enough and I in my infinite wisdom and I suppose naivete neglected to remind him to bring ID. "Why should I?" I thought "it's never been a problem before" and honestly I never even thought it would be an issue, like I say pure naivete. So ultimately we were horsed out on our arses, popcorn and all. To say I took it badly might be a teensy tiny understatement.

I understand its the law and they're only doing their job and without ID what could I do and all that, but for fuck sake. There's not much I look forward to in life these days and tonight was something I've genuinely been excited about for a while and some ring piece who was still in nappies when I cut my sons umbilical cord is the gatekeeper to what my son can or cannot see despite him being of age based on his subjective opinion that he doesn't look old enough, it's total bullshit. Say what you want about the Americans, but at least they've got it reasonably right when it comes film ratings and admissions. Its not like he was pissed up with his mates or anything he was with his Mum and Dad for christ sake. What a farce. I'm genuinely gutted.

Anyway sorry about that, rant over. Never saw the film so I couldn't tell you if its any good or not. Trailer was all right though. 7/10.
Top

That's pish. Did the Edwin refund you at least?
Top

I'm shocked you're old enough to have an 18-year-old son!
Between tedium and fright
Such is the song of the nether world
The hissing of rats
And the jarring chants of angels
Top

I believe the missus secured a refund for us all when I was busy throwing a hissy fit in the general direction of anyone who would listen willingly or not.

Sometimes I cant believe it either Doug. Although I'm not that old really, at least that's what I like to tell myself, we just had him stupidly young.
Top

Once ...Hollywood
Being a decrepit old man I got in.

It’s overly long self indulgent wank. I didn’t hate it but it’s just a lot of the same joke over and over and it desperately needs an editor to cut a good 30-50mins. It has some nice moments like Sharon Tate going to the movies which was probably the highlight (if you ignore her taking her shoes off and toe fucking the camera). The finale is certainly a thing.


PS the main ladies all toe fuck the camera at some point. Probably self aware..... maybe.....

I feel like they should just have gave Charlie the toaster instead of the girl.
I used to be eVoL but I got better.
I like everything now.
Top
Post Reply
412 posts