Tired of hiding their sexism the writers decided to put it front and centre this episode I see. The way Dany flipped because her "friend" had been executed and Jon refused to kiss her after she had just torched someone was just EUGH. It very much plays into the whole "She can't be trusted because she is a women" nonsense that pervades sections of society and was brought up by Varys in the previous episode. Same with Arya, that she just gives up on this quest for revenge having started it knowing full well what it will entail and even having intimated to it with Gendry in the previous episode. A bloke turns around to her and says "Best leave it to me luv" and she just gives up. There is no way a male character would have been written in the same way.

Separately: Varys' end was dumb with the master plotter decides to just ask Jon outright to commit treason; suddenly one dragon is enough to take out Kings Landing so who cares about the ones that died; Jamie and Cersi go splat with Jamie's arc being very WTF and most of the show was people running around whilst dodgy CGI masonry fell on them.

The only thing I'm looking forward to in the final episode is seeing how many more ways the writers can mess up.
Top

D&D haven't been able to write women at all since they overtook the book material. They seem to think that the only way to be an empowered female is to either be some super unbeatable bad ass stone cold assassin or a cold hearted mastermind bitch; essentially just traits typically associated with strong male characters. Even Sansa has been butchered, what happened to early seasons Sansa where her ladylike courtesy was her weapon? Now she just has resting bitch face and throws shade at Dany and all the other characters reckon she's "the smartest".

I don't rate D&D's writing overall to be honest, they've shown enough times now that they don't really get nuance at all when left to their own devices; but they are particularly bad when it comes to portraying strong females. You can make a defense for Arya, as she has always emphasised that she isn't a girly character, though that doesn't mean they haven't ruined her completely in other ways. But Dany and Sansa are just so poorly written overall now.
Top

Gradually catching up and reading the posts made after each episode we watch. Tonight we watched the battle for Winterfell.


Made me laugh, amazing just how angry some people get.
He's not wrong mind .....

This was pretty funny, I actually mentioned a significant number of these points to my wife as it went on, starting with the suicidal cavalry charge.
Top

Presumably pointless, but when over 750,000 people sign a petition to remake a season of TV because it's so bad, you'd hope the powers that be would take note that this sort of lazy abandonment of a beloved franchise is not good enough.
Top

And as counterpoint to that, you have this nonsense: https://www.theguardian.com/tv-and-radi ... -the-bells
Top

Watched episode 4 last night, and then caught up with people's comments on the episode in this thread... can only agree with what was said re the death of Rhaegal, Varys' stupid lazy backstabbing (he spent countless years plotting for the return of Dany, and now wants to ditch her because... reasons?), the laughable appearance of the walls of King's Landing and Cersei's decision, for some reason, not to obliterate the small group of enemies standing a few dozen feet from her siege weaponry.

Why the fuck didn't she just mow down Tyrion, either? She literally just dispatched a mercenary north to do that very thing, has spent years seeking revenge on him (god, she hated him with a passion even before he killed their father). If her change of heart with Tyrion was in order to avoid the ruination of KL I could understand it, I guess, but she then ensures that very thing will happen by killing Missandei.

Click bait bullshittery ftw!
And yeah, I was guilty of being incredulous enough to read it off my Google feed

What a tool. I would never begrudge someone for enjoying or appreciating something, but this guy is blaming the people making valid criticisms because they don't accept the dire quality they've been given.
Top

Rhaegal should have lived till the siege, when the bells rang they should have accepted the surrender. Cersei should then have detonated the wildfire in the city killing most of both her soldiers and the northern army, taking Rhaegal and grey worm with it as well as almost all of kings landing. Then Danny goes nuts on the red keep but Cersei somehow escapes and can blame it all on Danny and gain support elsewhere against the “mad queen”.

It’s great how it went because you can think up any old bullshit and it’s already better than what we watched!

What if Arya found out Jamie pushed Bran out the window. Cersei runs up to Jamie in the tunnels then a flash of steel, blood starts coming from her throat. She looks confused, and looks town to see a real right hand holding needle before falling dead. Cut to Jamie’s body with no face elsewhere.

At work the other day we were trying to come up with the worst way they could possibly end it, but our ideas will be nothing compared to what we actually get.
Top

I signed the petition, not because I think HBO would actually re-shoot anything, or because it'll make any difference to Game of Thrones at all but I do hope that other writers and directors (I'm looking at you Lisa Joy and Jonah Nolan) take note that you really shouldn't try and plan your plot points around what Reddit might figure out. The collective potential of The Internet is almost always going to have some people figure out what you were planning; just accept that.

As GRRM has stated (how ironic) it's really bad and stupid writing if, after you've built up your story to show that the Butler did it, you suddenly "subvert expectations" by re-writing the ending to make someone else do it.
Top 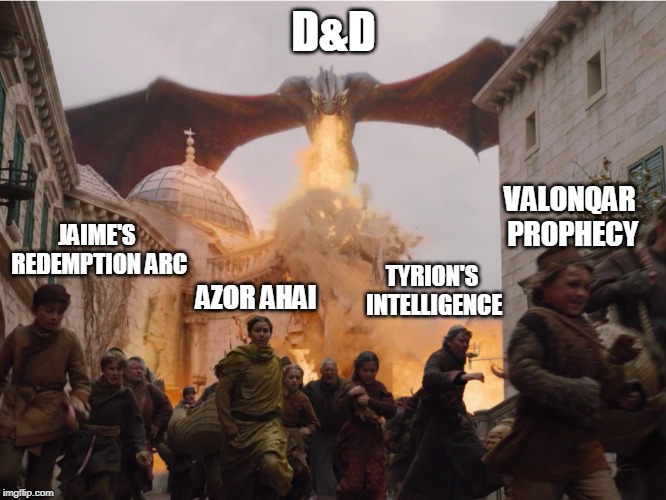 That petition is a bawhair from a million now

I used to be eVoL but I got better.
I like everything now.
Top

Spoiler
Ignoring all the things that were left unresolved or casually brushed aside, and without probing too far at the problems beneath the glossy sheen... it was reasonable. It was played very safe. Again, ignoring everything else, it does make a strange sense for Bran to be king given that he knows the truth of everything, although it raises questions about whether the Six Kingdoms are now a surveillance state.

Of course Bran’s true nature and the nature of the Long Night were entirely ignored. There really was nothing more to the Night King and Bran had no real significance in his defeat, nor would it really have been a big deal if he’d scragged Bran, so Bran’s story was ironically pointless considering he was elected king on the basis of having the best story ever.

Drogon melting the throne kind of makes sense, as he is presumably intelligent enough to realise it’s ultimately what killed his mother. What doesn’t make as much sense is why he spared Jon. Again, brushed aside.

I feel like if I switch off my critical eye, it’s a vaguely satisfying ending. The performances were on point, I’ll give them that. This is not the quality of resolution we should have got, though.


EDIT: More rambling. The list of unresolved and glossed-over items is pretty bad when you think about it:

- The Azor Ahai / Prince that was Promised prophecy was apparently a load of balls.

- What happened to Ellaria Sand after Cersei locked her under the Red Keep in season 6 and promised to keep her alive so she could watch her daughter die? Seems like everyone just forgot about her since the new ruler of Dorne who turned up to the summit was Captain Generic Dornishman.

- The Night's Watch supposedly still exists, but why, other than it being a penal colony? If that's the case, why could Jon just bugger off up north of the Wall? If any criminal can plead to be sent to the Wall and then just wander off wherever they want, it's not a great incentive against crime.

- Why didn't Yara declare independence for the Iron Islands? It's what they wanted, and it didn't seem like Bran gave a toss what anyone did.

- What happened with the Dothraki after Dany died? I get that Grey Worm had control of the Unsullied and against all odds decided to arrest rather than slaughter Jon, but the Dothraki? Who kind of worshipped Dany and were blood of her blood? We can't seriously be expected to believe they all just went "oh well, back to Essos".

- I like how nobody seems that bothered about Drogon. A rogue, grieving dragon on the loose and heading east, and all the small council has to say is "LOL, unlucky Essos!"

- Speaking of Essos, I guess everything's still peachy-fine over in Slaver's Bay ever since Dany left her morally-bankrupt, disgruntled ex-fuckboy in charge.
Top